This really annoys me--Christmas stuff already out in shops and it’s not even Thanksgiving. Yes, I am fully aware that we Brits don’t actually celebrate Thanksgiving (much to the annual surprise of my grandmother) but I hate seeing Christmas tat out before December. There was some  stuff out before Halloween even. Unbelievable.

Yesterday I noticed that the city Christmas lights were already turned on. Christmas lights--in November. November!  Last year I read something that said the city needed to raise £10,000 to pay for the electricity used by the city lights--and this was in addition to donations that paid for some of it. £10,000!!!!!!!!!! Can you imagine what £10,000 could do for feeding the homeless or providing toys for underprivileged kiddies? It boils my blood to see money wasted when there is poverty and emptiness in people’s lives. And maybe if you didn’t start using up electricity in NOVEMBER it wouldn’t cost £10,000. Just saying.
That being said, I really don’t mind getting or giving a Christmas pressie early. Yes, I know, double standard. But it is my double standard and I fully accept any responsibility for it (or any present that may come my way.) Saturday at the market Spiderman and I chanced upon a craft stall with a hand-blown glass red back spider (definitely the Australian red back as it has the red marking on the top side of its round black abdomen rather than the American black widow who has the red hour glass on the underside of the abdomen) on sale for £12. Now we set a limit of £5 each to spend on each other for Christmas and usually try to score something cool second hand--the cheaper the better. Last year I think we both managed to spend £2. The spider was so beautiful and well proportioned that we decided to pool our money and buy her as our joint Christmas gift even though we went £2 over budget. Look what a lovely cutie-patootie she is: 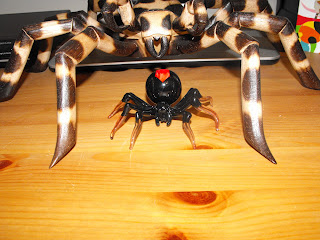 She has the place of honour under the big wooden one Spiderman bought me as a surprise gift a few months ago.
So just to recap--senseless waste of electricity=BAD
Early gifts=GOOD
Just saying.

Posted by Heather Tisdale at 23:30