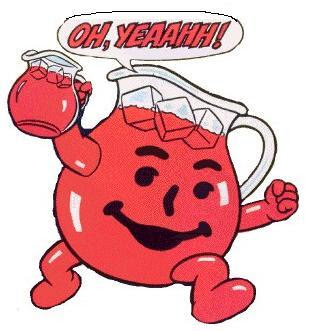 We all grew up on Kool Aid. It was red and sweet and made you hyperactive. Remember that huge pitcher who would crash your through your wall and make life even more fun? Nobody cared that he'd just destroyed your house because he brought Kool Aid with him! It was meant to be a healthier drink than soda. All those moms in the commercial saying, "With Kool Aid I can control the sugar." Well, in reality each cup of Kool Aid has 5 teaspoons sugar--that's 20 grams--about 80 calories. Not so cool now are you, Kool Aid? No wonder childhood obesity is sky rocketing.

Posted by Heather Tisdale at 05:01