One of the things I like to do is to research a period in history and write a monologue and perform it for the children in my school to tie into their history topics. This is the perfect opportunity for a gobby show-off like myself to use my talents. I have a BA in theatre and I enjoy creating a character, designing costumes and making props and acting. The children really enjoy it as it makes history come alive and the teachers enjoy it because I can teach the whole of the lesson for them and they get some quality writing out of it. I perform the monologues (which run between 25-35 minutes) and then follow with a Q&A with me in character and then a talk by me about my research. The lesson can take a whole hour.

I now have a dramatic monologue complete with costume and props for all year groups. For year three--I am Rose Peppercorn, an eleven year old evacuee during WWII (Britain since the 1940s), for year four I am Boudicca, Celtic warrior Queen (Romans and the Celts), for year five I am Anne Boleyn (The Tudors) and for year six I am Flora Spencer, thirteen year old housemaid to the Greenwood family (The Victorians). 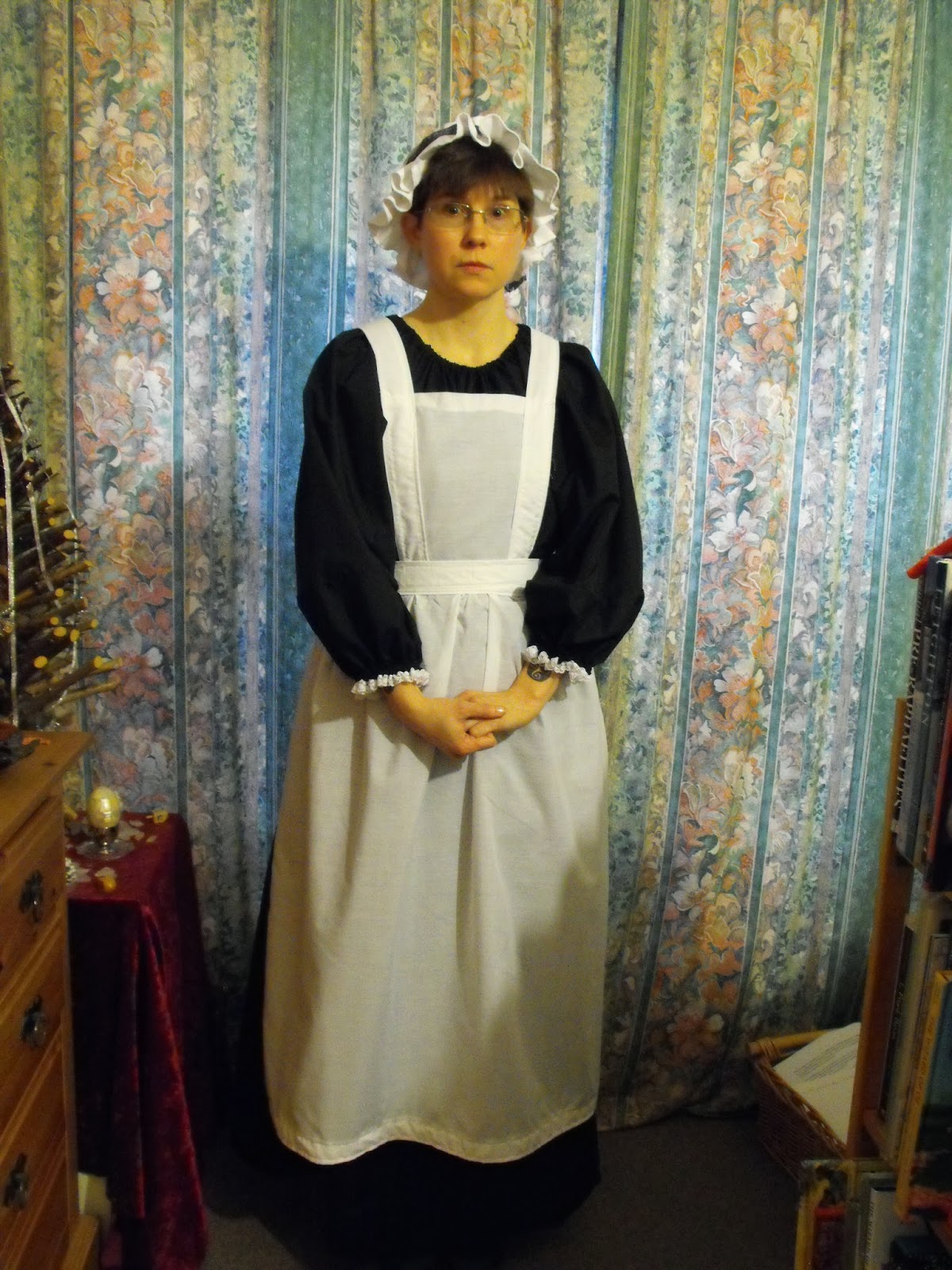 Yesterday I performed as Flora and I have to say it went better than my wildest dreams. This is the one with the most complicated set as I had to have a full bedroom set up--with a bed (actually a padded bench), an ornate wooden chair, a table with books, a nightstand with decorative china ornaments (bought for 50p each from various charity shops) and a small wooden trunk. There were loads of props as well. 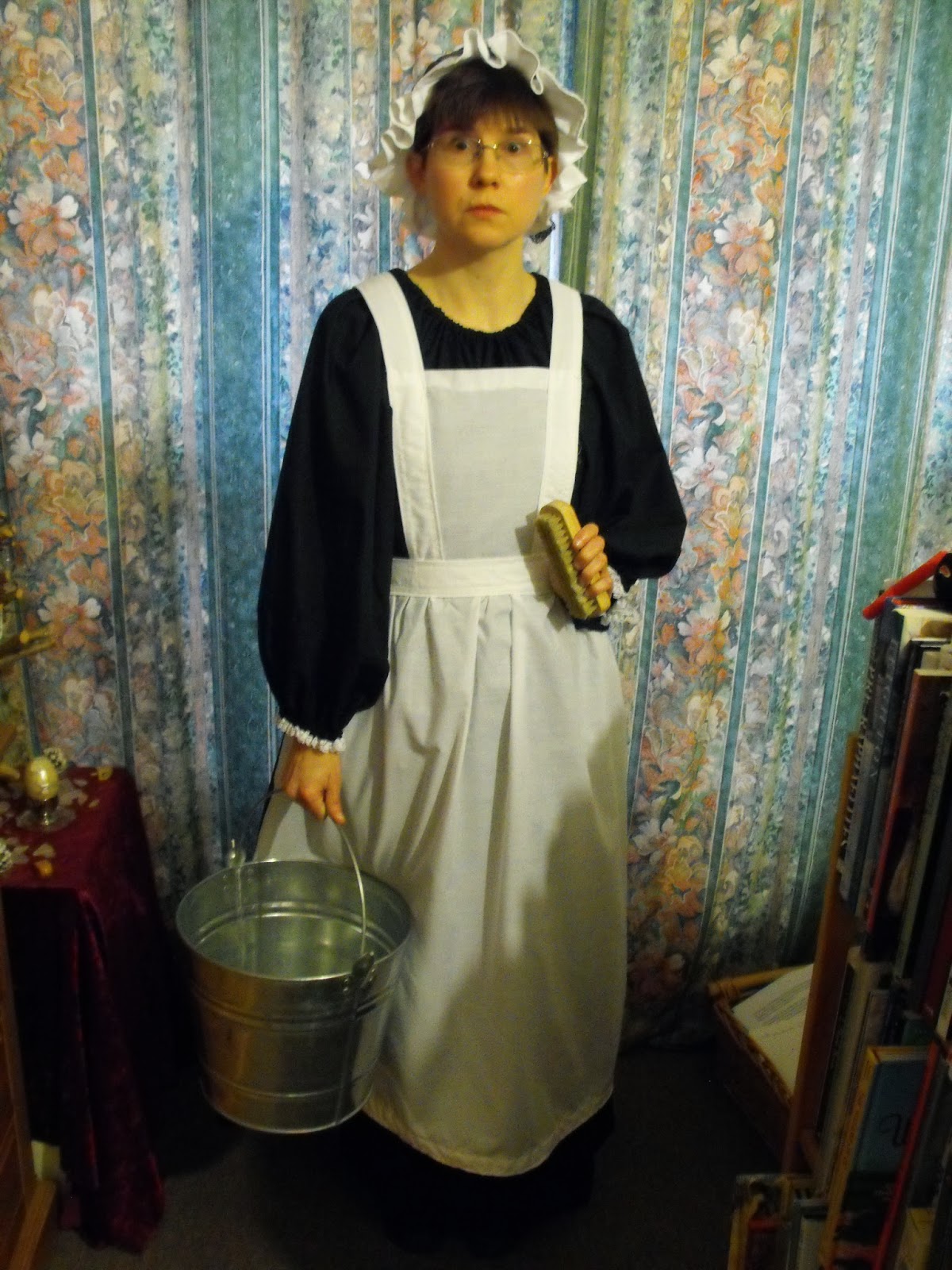 Here’s Flora with her bucket and scrub brush. I actually had to scrub the stage on my hands and knees for at least a page of dialogue. 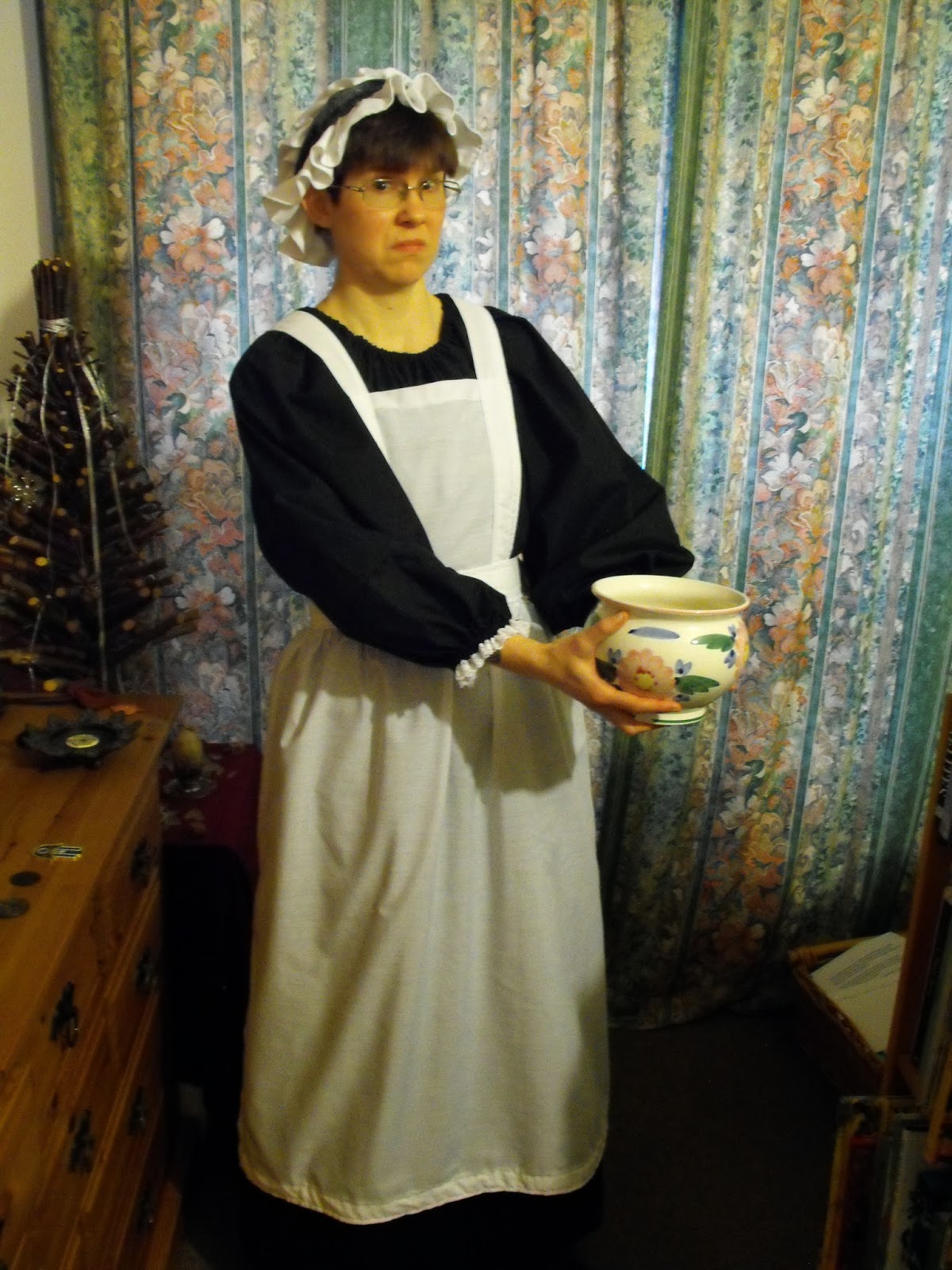 Here’s Flora emptying a chamber pot.  One of her least favourite tasks.


I chose this because through my research I discovered that one of the leading cause of accidental death of children under the age of five at this period in history was burning to death.  Some of it was the poor families often had no fireguards to protect you from the open flame but it was also due to the development of cheap flannelette fabric. It was very warm against the skin and exceedingly cheap to buy and was favoured by many poor households, but was also extremely  flammable. It also had the unfortunate property of melting onto the skin so if you were set alight wearing it, you died an agonising death with the fabric seared into your flesh. This is the fate of her brother. I set my story in 1872, but it wasn’t until 1908 that laws were passed about fireguards and non-flammable fabric was introduced.

She spends much of the monologue reminding the audience to stay quiet and not be seen because she cannot afford to lose her position, even if that position is not a happy one (she is paid half of what the other maid is paid due to coming from the workhouse).It ends on a tragic note for Flora, where momentarily distracted by hunger she carelessly drops a small china figurine while dusting. She offers to pay for it out of her wages and begs the Mistress to please have mercy on her and not send her back to the workhouse, but to no avail.  It ends with her going to pack her bags, leaving without a character reference.

This was the first time I had attempted it with the actual breaking of the china ornament. When it tumbled out of my hand the whole audience gasped! Seeing it really broken certainly made it very real for me and I cried real tears as she tried in vain to put it back together again before pleading with the Mistress. A small unfortunate side effect of breaking something was that I accidentally cut myself ever so slightly. I didn’t feel it but as I came out for the curtain call noticed there was a spray of rusty droplets on my white apron and I opened my palm to reveal a small drop of blood and so had to get first aid before the Q&A. Alas, one has to suffer for one’s art, luvvy. A quick glance at Mrs Beeton’s Book of Household Management revealed that a soak in cold salty water would remove bloodstains.

The best bit was afterwards, seeing the reactions of the children who were completely mesmerised throughout the performance. Even the naughty ones sat transfixed and at the end the naughtiest boy of all came up and asked to help me tidy the stage which I found extremely touching.  We had a full fifteen minutes of questions for me as Flora and it could have gone longer, but we ran out of time. The  main question was--What happened to you? Did you go back to the workhouse? So in case you wanted to know the fate of our heroine Flora let me warn you that it is a sad one. She tried to find work but no household would take her on with a character (a letter of recommendation). She tried to be  flower seller like her mother, but in February the flower trade was poor. She decided that if by the end of the week she had not found work she would go back to the dreaded workhouse. She didn’t make it. She was found frozen to death in a doorway. 1872 was a particularly bad winter and eleven other homeless people froze to death that night as well. It made the papers and Mister Greenwood, her former master (who believed it was better for a girl to work as a maid than in a factory because factory girls worked fourteen hours a day, not comprehending that housemaids worked up to eighteen hours a day) read it in the paper, but didn’t even realise that Flora was among the dead.

So no Charles Dickens happy ending, with rags to riches for her. But that is what life was like for those in the precarious position of being poor.

Poor Flora. But at least the children will never forget.

I could not have created the character without copious amounts of research help from the Amazing Spiderman  He found me books about life in the workhouse and books about the working poor. He even located a copy of  Mrs Beeton’s Book of Household Management  and read pertinent parts aloud to me in a posh lady’s voice. Thank you Spiderman, for making this period come alive for me and keeping me in fits of laughter to keep me from crying at Flora’s tragic fate.

Posted by Heather Tisdale at 05:53