Hello and welcome to part four of Murder Story Monday. Today I will be looking at a version of The Singing Bones from Italy.

This version bears some resemblance to other tales such as the Grimm's versions of The Griffin/Three Golden Hairs from the Devil in that someone is on a quest to steal the golden feather (or hair) in order to gain something important or heal someone.

Jim Henson's The Storyteller does a version of this quest story called The Luck Child that features the golden feather of the griffin.

The griffin feather/quest story is expanded in this version. Three sons are sent on a quest to find the griffin's golden feather in order to save their father's sight.  When the youngest brother finds the golden feather, his brothers kill him and take the glory for themselves. As in Child ballad 10 and ATU 780, the bones of the wronged person sing/play music.

Today's story is entitled The Griffin from Italian Popular Tales by Thomas Frederick Crane.
This version comes from here. 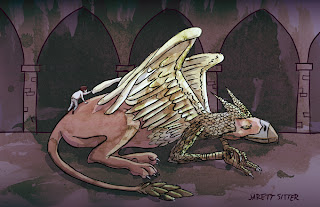 The Griffin
Italy
There was once a king who had three sons. His eyes were diseased, and he called in a physician who said that to cure them he needed a feather of the griffin. Then the kind said to his sons, "He who finds this feather for me shall have my crown."

The sons set out in search of it.

The youngest met an old man, who asked him what he was doing. He replied, "Papa is ill. To cure him a feather of the griffin in necessary. And papa has said that whoever finds the feather shall have his crown."

The old man said, "Well, here is some corn. When you reach a certain place, put it in your hat. The griffin will come and eat it. Seize him, pull out a feather, and carry it to papa."

The youth did so, and for fear that someone should steal it from him, he put it into his shoe, and started all joyful to carry it to his father. On his way he met his brothers, who asked him if he had found the feather. He said, "No," but his brothers did not believe him, and wanted to search him. They looked everywhere, but did not find it. Finally they looked in his shoe and got it. Then they killed the youngest brother and buried him, and took the feather to their father, saying that they had found it. The king healed his eyes with it.

A shepherd one day, while feeding his sheep, saw that his dog was always digging in the same place, and went to see what it was, and found a bone. He put it into his mouth, and saw that it sounded and said, "Shepherd, keep me in your mouth, hold me tight, and do not let me go! For a feather of the griffin, my brother has played the traitor, my brother has played the traitor."

One day the shepherd, with his whistle in his mouth, was passing by the king's palace, and the king heard him, and called him to see what it was. the shepherd told him the story, and how he had found it. The king put it to his mouth, and the whistle said, "Papa! Papa! Keep me in your mouth, hold me tight, and do not let me go. For a feather of the griffin, my brother has played the traitor, my brother has played the traitor."

Then the king understood the story and had his two sons put to death. And thus they killed their brother and afterwards were killed themselves.

Stay tuned next week for a version of the Singing Bone from Switzerland.

Posted by Heather Tisdale at 00:44