What We Ate Wednesday—Mardi Gras King Cake (vegan and GF!)

Hello lovelies! Yesterday was Shrove Tuesday, so depending on where you live it was Pancake Day (The UK) or Mardi Gras (The US.)

Spiderman came home from the shops with a twinkle in his eye and an extra shopping bag. I could definitely tell he was up to something. I looked in the bag:
Gluten free puff pastry
Vegan cream cheese
Food colouring

What was this all about?

“I have decided I would like to make a King Cake,” he replied.

King Cake (in case you don’t know) is thought to have been brought to New Orleans from France in 1870 and is a type of cake eaten in Louisiana after Epiphany (hence the name KING cake, since Epiphany marks the arrival of the Three Kings who visited Baby Jesus) and in the big pre-Lenten blow out that is Mardi Gras. Lent is a time in the church for giving something up, and in the early church, a time for plain foods without fats or sugars (or fun) until Easter. Hence eating lots of fatty, sugary cakes right before Lent to use up all your ingredients. This is also why folks in the UK traditionally make pancakes on Shrove Tuesday, to use up their fat and sugar before Lent.

It is also traditional to hide a little something in the cake to represent Baby Jesus. In the past it might have been a dried fava bean, but these days it is a plastic Baby Jesus. This Plastic Jesus is for some reason almost always an unnatural shade of pink, but we did once find a brown one which I thought was more appropriate. Throughout history, the person who found it might be crowned the Lord of Misrule and be able to order everyone about in silly ways. These days, whoever finds it buys the next cake.

King Cake is a bit like a giant cinnamon roll with drizzled icing and granulated sugar in purple, green and gold (PURPLE which signifies "Justice," GREEN for "Faith," and GOLD for "Power.") And the best ones have a cream cheese filling. Hence, why Spiderman brought home a tub of vegan cream cheese.

“If you are going to go out, you might as well go all out,” he said as we unloaded the groceries.

We decided to flatten out the puff pastry and spread the cream cheese on it with some cinnamon and roll it up, and bake it then top with traditional icing and coloured sugar.

It is worth noting that in the UK Jus Rol brand puff pastry is accidentally vegan, and they make a Gluten Free version too. I don’t know what’s available in the US, sorry folks.

Then while it was baking, we coloured our sugar. In the UK, sugar is vegan, but in the US many white sugars are bleached white by filtering through ashes made from bone char, which is just a fancy way of saying burned up animal bones.

We couldn’t find purple food colouring, so we had to use a mix of red and blue. No matter where you live, check your labels on the red. If it says cochineal, carmine, natural red 4, crimson lake or E120 then it is made from crushed up bugs.

Crushed up bugs, people! Blech…. And you should know that this is the most common colouring in cosmetics such as lipstick.

He found some food colourings labelled Suitable for Vegans at B&M Bargains for £1 each. Our red dye is made from paprika extract.

Anyway, we put about 20 drops of each colour into a quarter a cup of sugar and dyed our sugar the requisite colours.

When the King Cake had cooled we drizzled on a glaze of icing sugar and the sprinkled on our coloured sugar.

Then went into a diabetic coma for a bit.

This is by far way more sugar and fat than we normally eat…but bloody hell it was delicious.

And it is a holiday.

The only thing we didn’t have was a plastic Baby Jesus. 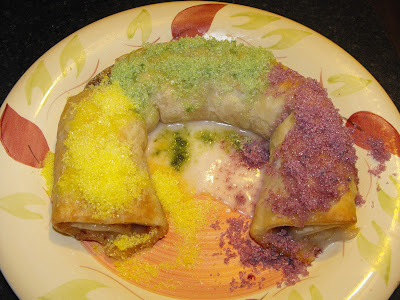 King Cake
One sheet of Jus Rol pastry, regular or GF
1 container vegan cream cheese (we used Violife. Tesco makes one, but we found it a bit plasticky)
1/2 cup icing (powdered) sugar to beat with the cream cheese
Cinnamon

Preheat oven to 200C/400F
Beat your softened cream cheese with the half a cup of icing sugar and set aside.

Roll out your sheet of pastry, spread cream cheese on it and generously sprinkle cinnamon.

Roll up and carefully pull around into a roughly circular shape.
Bake for 20-22 minutes, remove from oven and let cool.

While baking, divide your granulated sugar into quarters and add a few drops of food colouring into each one and stir until you get a colour that you like.

When cool, make a glaze with  1/3 cup sifted icing sugar mixed with enough warm water to make a runny paste. Drizzle over the cake and then sprinkle the coloured sugar on top.

note: we managed it get it in a horseshoe shape, but in future (and there will be a future) we will just leave it as a tube and not bend it as it cracked a bit and some of the cream cheese leaked out.  Also would suggest pinching ends shut next time so aforementioned cream cheese didn't leak out. Also, this is way too much coloured sugar than you need. So either make more King Cakes or make other baking endeavours more festive.

Posted by Heather Tisdale at 00:55