Hello lovelies! I know I normally use the MAGICAL LOAF STUDIO to make a main dish, but I was intrigued by my step-dad's meatloaf recipe. My mum told me about it and said it reminded her of one of my vegan ones due to the oats and the tangy BBQ sauce. Carl said everything was vegan except the ground meat and the egg and I was like, "Have no fear, veganiser is here!" because making things vegan is my superpower.

The recipe called for a pound of ground meat. I had to consult google as to how much that actually entailed after cooking. Reading the descriptions of cooking meat (blech...) reminded me of the fact that even when I ate it (and boy, did I eat it!) I didn't like to cook it. Memories of ground meat swimming (drowning?) in grease and having to be drained on layers and layers of paper towels made me so glad that I choose a healthier life now.

Anyway, a pound of cooked ground meat is about 2 cups. Easy peasy. My savoury lentil recipe makes a perfect substitute for ground meat. I cooked mine a day ahead because it makes about 2 and a forth cups and I used the extra as a pizza topping (it made a lovely "hamburger" pizza with some cheese sauce left over from my recent recipe for roasted red pepper cheese.)


Boil then simmer until most or all of the liquid is absorbed. About 30 minutes.

That sorted the ground meat then, but what about the egg? The recipe called for one beaten egg for binding. I decided on a chia egg. Could have been a flax egg, I just didn't have flax meal. Are you thinking a what kind of egg? You mean chia as in ch-ch-chia? Yup. The very same. Chia (and flax for that matter)seeds are a powerhouse of nutrients and will go all gooey like egg whites if you add water.

The rest was the same. 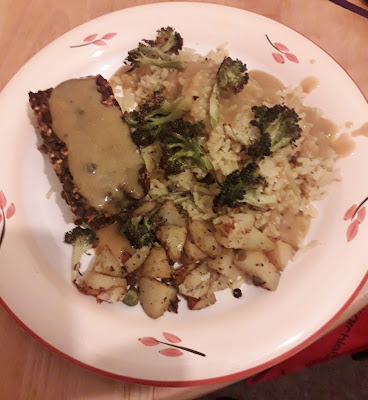 
1. Make your egg first to give it time to set while your oven preheats.
2. Mix everything together and spoon into a greased loaf pan (Or lined with parchment paper)
3. Bake for 45 minutes and let it cool for at least 10-15 before you attempt to slice it.

Ours was a wee bit delicate as I sliced it, but my mum says that Carl's is too, so it works just like the "real deal." And it made a big enough loaf to have over two meals. The first night we had it with potatoes, peas and gravy and the next night with brown rice, roasted broccoli, leftover potatoes that I roasted along side the potatoes with more gravy. It was much firmer the next day after a night in the fridge.

It made a nice change from ones we normally eat. The BBQ sauce was tangy and the oats gave it a chewy interior, slightly crispy exterior. Thanks Carl!

Posted by Heather Tisdale at 04:19