What We Ate Wednesday--Pack Lunch Curry Noodles (or soup)

Hello lovelies! I made a MASON JAR SOUP to take to work. All you had to do was add boiling water.

I made this variation of curried noodles that taste good as is, or can be made into a soup if you add boiling water and a tsp of broth powder . I have eaten it both ways and it is delicious.

You need to do a little prep work before hand, but once it's done it comes together in a snap. You can eat it straight from a mason jar or add it to a bowl before you add your boiling water.

If you plan to eat it as it is I would use a whole noodle nest, but if you plan it for soup then just just a half. In the picture I ate it as noodles and wished I had more, so if you are greedy--don't skimp on the noodles!

Use whatever kind of quick cooking noodles you can--if wheat is not an issue then ramen noodles would be fine. I use brown rice noodles that in come in a pack of 5 nests for £1.50

Your prep work is that you need to freeze some coconut cream. You can buy packets of coconut cream to do this, but here they come in a cardboard box with an inner plastic bags, so I went with a tin of full fat coconut milk as I could recycle the packaging. Also, it was cheaper. I can buy a tin of coconut milk with lots of cream for 79p at Lidl.

If you shake your tin and it sounds all sloshy then pop it in the fridge overnight and the thick cream will rise to the top. Line a small pan or baking sheet with parchment paper and carefully scoop out coconut cream into Tablespoon portions and freeze individually until solid. Then pop them all together in a container and pull out a coconut blob when ever you need one. Because they were frozen separately they won't stick together. Clever, eh?

But Spidergrrl, I hear you cry, why do we have to freeze it at all? That sounds like a faff. Well, it is and it isn't. Once your cream has risen to the top the whole thing takes 5 minutes to scoop out and then you have single servings of coconut on demand that won't spoil and go funky in your fridge and waste money or food. You'll thank me later.

If you are taking this for lunch, then obviously do the prep work the night before, then mix the sauce in the next morning. If you are eating it now I will give you some tips to defrost your coconut blob. 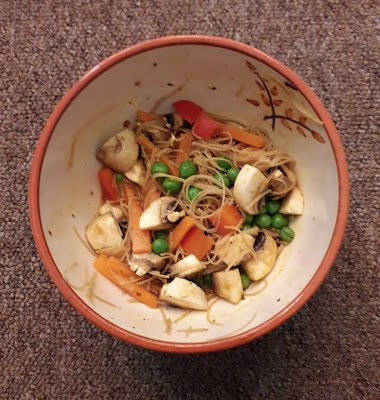 For the sauce--in a jar combine:
1 coconut blob
1 TB tamari or soy sauce
1 TB lime juice (bottled is fine)
1 tsp (Balti) curry paste
1 tsp liquid sweetener
Put jar in fridge overnight to allow coconut blob to soften. In the morning give it a whisk with a fork to break up the coconut. If it still feels hard add a TB of hot water to break it up or put the jar on the radiator for 10 minutes or so to heat it up.

Put ingredients into a pot and cover with boiling water for as long as the noodles need to cook. Mine take four minutes. Then drain and run under cold water. Add to jar. Put the jar in your fridge.

In the morning add:
1 sliced mushroom
the sauce

Take it to work. When you are ready to eat, add the contents of your jar to a bowl with 1 tsp instant broth powder and fill up with boiling water. Then eat. Or just eat as it is in all its noodle-y glory.

This was really lovely--tangy and savoury. It made a tasty lunch that travelled well. Just bring a serviette as the noodles are saucy and slurpy.

Posted by Heather Tisdale at 05:19