Before I begin this week I would like to ask you a favour. If you are a reader of Fairy Tale Friday and enjoy it, would you consider backing my kickstarter campaign to help me publish my book of retellings of traditional tales through a feminist lens? Please go to the link below and see what it is about. I am grateful for your support. Thanks.
WOUNDS: NEW OPENINGS INTO OLD STORIES


Hello and welcome to Fairy Tale Friday. Are you sitting comfortably? Good. Then I’ll begin.

This week we look at an unusual tale in that the gender roles are reversed. I found this story in the March 1996 issue of Cricket Magazine for Children. Like many of its counterparts, our hero’s abusers are lazy, rude and selfish and it is the opposite qualities which set our protagonist apart that make them marriage material. This version is entitled The Most Obedient Servant retold by Anna Salyers Miller and illustrated by Deborah Nourse Lattimore.

Sadly, in so many of the female versions (basically every other one) our heroine is admired by the prince for her beauty and her grace and perhaps her quiet self-effacing attitude. We have seen heroines who are passive and wait for a magical helper to solve their problems get chosen by the prince. We have seen heroines who displayed some spunk and ingenuity to make their dreams come true get chosen by the prince. But the prince never knew what lengths she had gone to get there. He just saw her pretty face and her fancy dress and her shy demeanour (so shy she won’t even tell him her name!) and that’s why he wanted her. Which makes me really sad.

This version has a loyal servant who is everything his two masters are not. He is kind and caring. He is studious and wise. He is loyal. The two brothers and their mother are the male equivalent of the wicked stepmother and ugly stepsisters, treating him badly after his father dies. In some of our tales our heroine wants to go to the ball, in other tales she wants to go to church. In every one of these tales, she needs new clothes to do it. She has to look to good to catch the prince’s eye. In this tale, a decree goes out that all unmarried men must come and take an examination to see who is best suited to become a high ranking government official and marry the king’s only daughter and someday rule the land. The spouse of the royal person is not chosen by their looks but by their intellect. This also makes me sad that so few of the female protagonist tales mention her intellect at all.

As you would expect, the two lazy masters don’t study at all. They tell their stepbrother the servant to study for them and fill them in later about what he has learned. Moonhi, being a very obedient servant, obeys. When they all go to the palace for the exam (Moonhi is there to do the cooking and the cleaning) they happen upon an old man. The man is hungry and so Moonhi shares his rice. The man is injured so Moonhi makes a poultice for the old man’s hand. The old man is so impressed that he encourages Moonhi to sit the exam which, being an obedient servant, he does. And what do you know—the old man was the king and he sees the true worth of our protagonist by his actions, in spite of his social class. In the female versions, we nearly always see the prince not care that her background was once humble or that she is dirty and wears rags because she scrubs up well. But here it is Moonhi’s actions and not his looks (although the story describes him as handsome) that make him a suitable mate.

The story itself is so beautifully rendered in Cricket magazine that I asked my husband the Amazing Spiderman to scan it for me. You will need to click on them to enlarge to read. 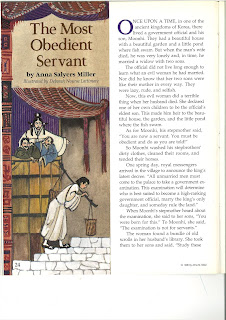 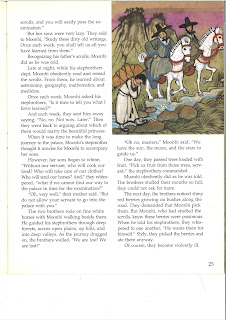 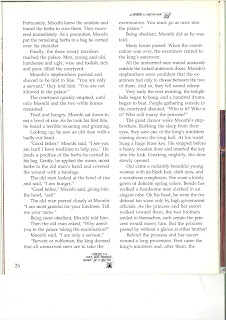 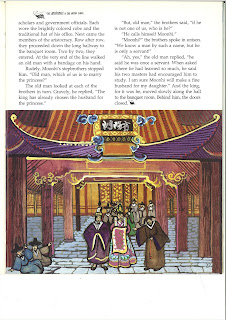 That’s all for this week. Stay tuned next week as we start to look at the other variation of Cinderella with a more incestuous edge.

Posted by Heather Tisdale at 23:23