This week we look at a tale from Germany with a spunky, resourceful heroine and an unfortunately abusive prince (which doesn’t stop her “liking him beyond measure.”) This tale was collected by German medievalist Karl Bartsch in his book Sagen, Märchen und Gebräuche aus Meklenburg (Legends, Fairy Tales and Customs from Mecklenburg) in 1879. Interestingly, Bartsch studied philosophy and was a pupil of Wilhelm Grimm—one of the Brothers Grimm along with his older brother Jacob.

In this tale, despite having a father who threatens to rape her, our heroine (who is not given a name) using cunning to outwit her father and improve her situation. In order to delay their union she asks for the typical silver, gold and jewelled dresses, and the customary strange coat (in this case a crow-skin) but also for a magic wand. In some tales she wears all the gowns at once, in other tales they are packed in walnut shells, but here she just hoiks them over her shoulder and magics herself to the next kingdom where she knew a prince lived. Then she magics a wooden chest for her dresses, disguises herself as a boy and seeks work at the castle in order to win the heart of the prince.

As expected in these tales, they meet while she is wearing one of the dresses and catches his eye. The prince, being in a foul temper because he cannot figure out who his mystery sweetheart is, throws both a boot and a brush at her head which does not deter her. He gives her a ring which she drops in his soup which catches his eye and make him look twice at the young boy Cinder Blower. Yes, remember oh best beloved, she is disguised as a boy.

Then, in what can only be described as the most romantic chat up line of the century, he asks her to check his head for lice saying, "My head itches. Look and see if any vermin are there." He sees her diamond dress glittering under her crow skin coat and the rest is history. The whole “you were my male servant and now I want to marry you” reminded me a bit of that episode of Blackadder where Bob turns out to be a girl. 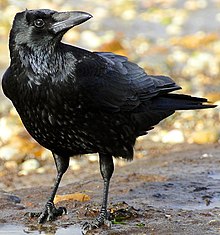 Cinder Blower source
A rich widower had an only daughter who was developing into a beautiful and charming woman. Her father's heart became inflamed with impure love, but she withstood his advances. He threatened to force himself on her, and she responded with cunning. She promised to yield to his will if he would give her a dress made of silver. When she received such a dress, she then demanded one made from gold, and the third time, one made from jewels. After receiving that one as well, she said, "Now all I need is a crow-skin coat," and then she made one last wish: a magic wand. These too she received.

Now in another land there lived a prince who had heard of the girl's beauty. Taking the magic wand in her hand and the dresses over her shoulder, she wished herself to the vicinity of the prince's castle. She immediately found herself in the castle garden. Then she wished for herself a chest in an oak tree in the garden, put her dresses in it, put on the crow-skin coat and went to the castle kitchen where she presented herself as a poor boy looking for work.

A few days later the prince came to the kitchen with some freshly killed game. She saw him and liked him beyond measure.

Soon afterward, there was a wedding in a nearby castle, and the prince went to it. Many people went there to look on at the dance. Cinder Blower asked the cook for permission to observe. She ran to the oak tree, put on the silver dress, and wished herself a carriage in which she rode to the castle. The prince saw her and danced with her, but after a few dances she disappeared. Seating herself in her carriage she said,

Darkness behind me, Before me light,
So none can follow me into the night.

The next morning the prince was in a bad mood, for he had been awake all night thinking about his beautiful dance partner. Cinder Blower was asked to polish his boots, and this she did, but she failed to polish one small spot on one of the toes. The prince noticed this and angrily came into the kitchen and threw the boot at her head.

The next evening there was another dance, and Cinder Blower again asked for permission to go. This time she put on the golden dress, then rode there in the carriage. The prince had been looking for her and was very happy when she arrived. While dancing with her he asked her where she lived.

"In Boot-Throw" was her answer. She remained there one hour, and then disappeared. In vain the prince asked where Boot-Throw was. No one could tell him.

Again that night the prince could not close his eyes, and the next day he was in an even worse mood than before.

Cinder Blower was asked to brush his coat, but he did not like the way she did it, and finally he threw the brush at her head.

The third evening Cinder Blower again asked for permission to look on at the dance, then put on her dress of precious stones. While dancing with her the prince asked her where she lived.

"In Brush-Throw," was her answer.

She let him put the ring onto her finger. Then she tried to sneak away, but the prince carefully watched her and followed close behind her. She climbed out of her carriage near the oak tree. However, she did not have time to take off her dress, but quickly put on the crow-skin coat over it.

The next morning when the cook was preparing the soup, Cinder Blower dropped the ring into it. The prince found it and asked the cook who had been in the kitchen.

"Only Cinder Blower and I," he answered.

The prince summoned Cinder Blower and said, "My head itches. Look and see if any vermin are there."

Cinder Blower obeyed, but when she stood before him, he saw the diamond dress glistening forth from beneath the worn-out crow-skin coat. Then he recognized her. "Now you are mine," he said, and he made her his wife and they lived happily together until they died.

That’s all for this week. Stay tuned net week for a tale of a princess who would not marry her father.

Posted by Heather Tisdale at 09:20