According to urbandictionary.com a Cumberbitch is:
Any woman who has a deep fasination with the wonderful, beautiful, talented English stage and on-screen actor Benedict Cumberbatch. 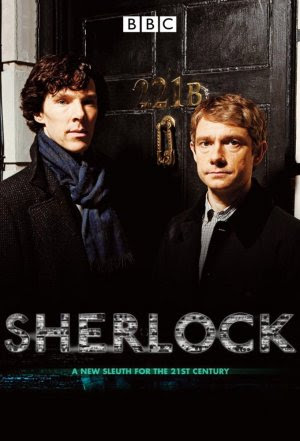 That would be me. We ordered season one of Sherlock from amazon for Spiderman's birthday and whoa! I was blown away by the show. It is written by Steven Moffat (hereafter known as "the Moffat") who is currently the head writer for Dr Who and one of our other favourite shows Coupling. The Moffat is the man. The series was also dreamt up by Mark Gatiss one of our favourite actors and writers and all around clever sod.

I have always like Sherlock Holmes--we own the complete Jeremy Brett series--and I adore the Mary Russell books by Laurie R King where Holmes was a real person (Conan Doyle his agent) and he has retired in Sussex Downs where Conan Doyle left him raising bees until her meets young Mary Russell who is an intellectual match for him and he trains her and they work together as equals solving crimes. The books are full of history and feminism and Holmes and Russell eventually marry--despite the age gap--and each book is better and better as they enter the early part of the 20th century together. But I digress.

The show Sherlock is an amazing update to modern times--that all works. Watson is just back from Afghanistan (as Conan Doyle wrote him to be) and they make a marvellous team. Watson writes not a journal but a blog of their capers. Holmes' tendency to send telegrams all the time is replaced by texts. But he is the same genius--sometimes cold and unfeeling--matched by Watson's warmth and humanity that make this sing. And it does. The writing is good--the acting is good--the show is thrilling. We immediately ordered season two from amazon. Couldn't wait.

We have the annotated Holmes series of books and we have had a jolly geeky time looking up stories as we watch. I'm all for making a big ole venn diagram of how the books differ from the show--maybe next time we watch. Which will be soon, I have no doubt.
Posted by Heather Tisdale at 05:30