As I wrote yesterday, I have always loved them and they have always loved me. I realised I had never made a proper introduction on the blog of all of girls (collectively known as the Spiderbabes) so here it is.


Arachnophobes look away now. You might want to have a cup of camomile tea and then a lie down. The rest of you, how can you not see God’s handiwork in all this?


Here they are from largest to smallest.


1) Lily Rose (Lasiodora parahybana) who is enormous—with leg span bigger than a CD--about the size of small plate or a man's hand. She is a salmon pink bird eater--the third largest type of spider in the world. the biggest spider in the world is the Goliath bird eater and is as big as a dinner plate. She likes to climb the walls and sit mid-wall in the corner of her tank. She also used to do this thing where she would hang upside down from the metal grate on the lid until she broke off a fang pulling that little stunt. Luckily, it grew back after moulting. She is named after the John Singer Sargent painting Carnation, Lily, Lily Rose.

2) Blanche Dubois (Acanthoscurria geniculata )who has stripy white legs and is a Brazilian white knee. She likes to sit on top of her green plants in her tank. She also likes to dump out her water dish and sit in it. She keeps her legs tucked up most of the time, but when she stretches out she looks like Cyd Cherise. She was fairly nervous when we brought her home and kicked her irritating hairs up whenever you took the lid off her tank so we named her after the skittish southern heroine from Tennessee William's play A Streetcar named Desire.

3) Rossetti  (Grammostola rosea), who is a Chilean rose. She loves to dig and has been known to dig everything up in her tank and then put it some place else. We have no idea why. Maybe it is the spider equivalent of re-arranging your furniture. She is named after Christina Rossetti and her brother Dante Gabriel Rossetti--two of my favourite Victorian (eccentric) poets and painters.

4) Tibia (Ephebopus murinus )who looks like someone painted bones on her body like a skeleton--people call her a skeleton spider. Tibia is very shy and hides a lot so the photo is the day we brought her home and were trying to get our out of her travel box and into her new tank. Tibs was named because the tibia is a bone in the human body as well as the fact that I played the character of Tibia the skeleton who was the servant to the Wicked Witch of the West in a production of The Wizard of Oz in 1987.

5) Pirouette (avicularia avicularia)  who is a Peruvian pink toe is our only arboreal spider which means she is a tree climber and not a ground dweller. She had tree branches to climb on and she likes to make a hammock out of webbing between the branches! She has tiny pink toes that look like ballet slippers (which is why we named her Pirouette)


6) Pippi Longstocking  (Brachypelma boehmei) who is a Mexican flame leg. She is the tiniest one we have, but she is growing really quickly. She was as big as a quarter when we brought her home and now she's about as big as a cookie. The picture shows her with one of her old skins. When spiders need to grow they shed their skin like a snake does (it is called moulting) and they split their old skin and leave it behind and come out a bit bigger. Having red hair, what else could be call her but Pippi? 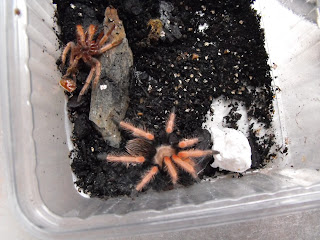 Anyway, we went to the Koi Pet place in Henlow yesterday with the express purpose of buying some crickets and maybe some new upgraded tanks for some of the other girls and somehow came home with a spider. My mother has this same illness, but with dogs. But like I say to her—“can all your pets fit on one set of bookshelves? I think not.”


So introducing  the newest member of our house hold….number 7) Polychrome. She is named after a character from the Oz books who was the daughter of the rainbow and often danced off the rainbow and was left on dry land until the next rain. She was a beautiful, multi coloured creature—which is perfect as our new spider is an avicularia versicolor and will change colour  as she grows.  She is currently a beautiful blueish colour--the colour of a rain cloud (which, incidentally, is also the colour of Krishna) the colour of your favourite pair of old blue jeans.

She starts off the colour of a Munchkin

but as she grows up she will turn a bright reddish orange—the colour of a Quadling.

Polychrome is just a wee baby --a month or maybe 2 months old judging from her size which is smaller than a 5p--about as big as your thumbnail. She’s so tiny she lives in a Dixie cup with a lid for the moment. We have to keep her cup quite moist as she has not  yet developed an exoskeleton impervious to water loss.  Her species hails from Martinique, but she was responsibly captive bred.

We don’t know much about her personality, except that like her sister species Pirouette (avicularia avicularia) she is arboreal and likes to climb. She’s so tiny we’re still working on getting a good picture of her--our zoom lens won’t zoom in enough just yet. Here is a shot of me holding her Dixie cup.


Spiders when they are young moult about every 3 months and as they grow up moult about every 6 months. Then they get a bit older and moult about once a year. But a spider doesn't become a sexually mature adult able to mate (make or have babies) until the age of 3 or 4 years old. We know for sure Lily Rose and Blanche are girls as we know how old they were when we got them because we got them from a lady who no longer care for them and she had raised them from a baby. We are pretty sure Rossetti is a girl as we think she is about 3 years old. Tibia is showing signs of being a boy--her bottom is really small no matter how much she eats--but she might turn out to be a girl. we don't know. Pirouette and Pippi and Polychrome are way too young to know. They could all be boys! But for now we will call them all girls. If one if them really is a boy we will know when they make their adult moult because they will come out with hooks on their front legs and little pouches that look like boxing gloves to store their sperm in. Like this:


we hope they will all be girls because female tarantulas can live 10-20 years but male spiders tend to die about a year of becoming an adult.


That’s the girls. All seven of them. Lucky seven. Until we bring home number eight.
Posted by Heather Tisdale at 04:49