I was asked to recite the poem Jabberwocky by Lewis Carroll.  to year six as part of their unit on the Victorians. I was thrilled because I loved this poem as a child--especially the way the words were completely made up as if you could make up a whole new language yourself. There was a time where I was obsessed with portmanteau words (words made up of more than one word. An example from the poem would be chortled--a mixture of chuckled and snort and a more modern example from the fabulous book Room by Emma Donaghue--scave--scared is what you feel but brave is what you’re going to be.)

Do you know this poem? If not then here’s your chance.


'Twas brillig, and the slithy toves
Did gyre and gimble in the wabe:
All mimsy were the borogoves,
And the mome raths outgrabe.

'Beware the Jabberwock, my son!
The jaws that bite, the claws that catch!
Beware the Jubjub bird, and shun
The frumious Bandersnatch!'

He took his vorpal sword in hand:
Long time the manxome foe he sought --
So rested he by the Tumtum tree,
And stood a while in thought.

And, as in uffish thought he stood,
The Jabberwock, with eyes of flame,
Came whiffling through the tulgey wood,
And burbled as it came!

One two! One two! And through and through
The vorpal blade went snicker-snack!
He left it dead, and with its head
He went galumphing back.

'And hast thou slain the Jabberwock?
Come to my arms, my beamish boy!
Oh frabjous day! Callooh! Callay!'
He chortled in his joy.

'Twas brillig, and the slithy toves
Did gyre and gimble in the wabe:
All mimsy were the borogoves,
And the mome raths outgrabe.


Anyway, I was all set to just recite it dramatically when I thought would add a sword to it for the bit about the vorpal blade went snicker snack. But then I went to sleep and the IDEA FAIRY came to me and gave me a wonderful idea. What if I could make a decapitated head of the Jabberwock to pull up on the line He left it dead and with its head he went galumphing back. Was it possible?

I started to look at various illustrated versions of the poem and then quickly made some sketches. I did a quick mock up to be sure if my idea about the head shape would work and it did. The next day I went to the market and spoke to the Fabric Man and said “I need to make a dragon-like creature. What have you got that’s cheap?” He rummaged around and found me this fabulous silver and black offcut for £1. It was a scrappy remnant but just the right size plus it looked like dragon scales.

Then I went to the Haberdashery Stall to buy some red ribbon for a tongue. I also had an idea of using buttons for eyes --the line is the Jabberwock with eyes of flame and so I was thinking yellow, orange and red buttons stacked on each other would give a nice 3D effect as well as looking fiery. Rose helped me pick out the perfect buttons and then I was set to go.


I went home and using what I’d bought plus bits and bobs from my scrap bin managed to put together this magnificent creature. 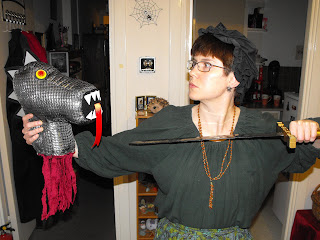 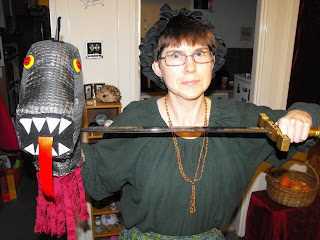 I love him so much I just might have to kiss him on his scaly, dragon-y mouth. 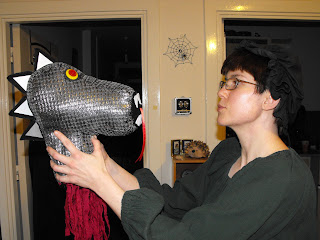 I decided as he had been decapitated he needed some bloody sinews to hang down so I tore some red cloth and sewed it on. It looks gory but not scary which is what I like.

I know some people have queried why a person would spend several hours making something for a one second appearance in a one minute poem, but that’s not the point. It was FUN. It gave me a chance to use my IMAGINATION and the kids (especially the boys) will dig it. Plus, I am ready for when someone asks me to do it again next year.

I got so excited about the idea that I thought of making the head of Medusa for year three’s Ancient Greek topic but Spiderman pointed out I did not want to become a “one trick pony” and become known as the lady who pulls decapitated heads out of bags whilst telling a story. He has a point. I was still slightly annoyed by his comment so I thought about making a decapitated horse head to leave on his side of the bed like a message from the Mafia. But that really would be pushing it.

So I’ll just stick with my Jabberwock, thank you very much.  I’m really looking forward to telling this one. It will be a frabjous day.

Posted by Heather Tisdale at 07:52