A diploma, a watch and a medal

It sounds like the start of one of those dreadful jokes. You know which ones I mean. A diploma, a watch and a medal walk into a bar…

Thankfully this is not where that is going. Do you recall, oh best beloved, when I write about the wonderful weekend and we saw the Hollywood Costume exhibit at the V&A? The two souvenirs I bought were the replica heart shaped watch given to the Tin Man and the medal of courage given to the Cowardly Lion. They did not sell a diploma or certificate for the Scarecrow--they has fake plastic straw to tie around your wrists and ankles instead.

I will be honest--there is no way on earth that these are really designed for children. They are plastic. They are cheap. In no more than two minutes (and 30 seconds for some more rowdy children) these would be crushed and destroyed. End of story.  Which is a shame because as a child I would have loved to play with them--I spent great portions of my youth writing Oz adventure scripts and making up dialogue and assigning roles to unwilling children (I often played the duel roles of Dorothy and the Wicked Witch ) and ready made props would have come in handy. I could never understand why no one else seemed to be as obsessed with Oz as I was. Perhaps this was because they often made snide remarks about my silver slippers and I hit them over the head with a script whilst explaining for the millionth time that the shoes were only RED in the film. You see, it was perfectly alright for ME to pick and choose which elements of the film and book I wanted to use, but not for anyone else. It is a wonder I had any friends at all.

But anyway. Whilst they may not be for playing with--they look really good and so I knocked up a diploma using a printer and some parchment paper and red ribbon I had and  using a discarded frame and some fabric made this: 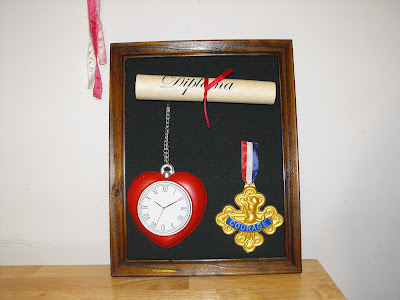 Now the interesting thing is whilst I preferred the silver slippers to the ruby, I always preferred the items given by the Wizard to the Scarecrow, Tin Man (real name Nick Chopper) and Lion from the film They are very different in the book.

The scarecrow:
FILM: a diploma that made him a doctor of thinkology
BOOK: his head was filled with bran (to give him a bran-new brain) and then was filled with pins and needles to prove that he is sharp.

The Tin Man:
FILM: a heart shaped watch on a chain that ticked like a heartbeat
BOOK: The wizard used tin snips to cut a small square shaped hole in his chest and inserted a small red silk heart stuffed with sawdust and the soldered the tin square back in place

The Cowardly Lion:
FILM: He was given a medal for bravery
BOOK: he was given some “liquid courage” from a square green bottle. After he drank it he felt brave. It is interesting that even back in 1900 the term liquid courage was used as a reference to alcohol.

I still love the film and the book in equal measures and therefore collect both film and book memorabilia. Spiderman will hang it on the wall up high so no one (and by no one I mean me, obviously) is tempted to fiddle with it and break it.

Posted by Heather Tisdale at 23:23