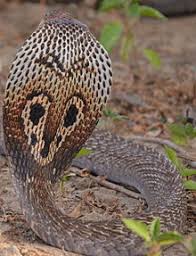 I had a weird dream last night--Spiderman would say when did I not have weird dreams--but this one was doozy.

I was at school, minding my business on the way to the photocopier when I spied 3 large black snakes slithering down the corridor. I quickly moved in for a closer look and I could see the mark on the back of their neck and recognised that they were COBRAS. Cobras! In school! Oh No!


Bravely, I grabbed a push broom and managed to herd them into the music room and slammed the door. Then I sent someone to tell the office to phone the police and another person to find the caretaker to lock the door. I could see the cobras rolling around on the floor with some recorders and felt very frightened.

Whilst I was waiting for the caretaker several children came up and asked to be let in to the music room to retrieve their musical instrument. "YOU CAN'T GO IN THERE BECAUSE THE ROOM IS FULL OF COBRAS!" I shouted. No one else seemed to be taking this as seriously as I was. I made a sign and taped it to the door that read:
WARNING--DANGEROUS COBRAS

Just then our secretary came to tell me that the police told her to phone the London Zoo and so she had. As I was waiting for some experienced herpetologist from the Zoo to arrive several more children came by and asked to enter the music room. By now the snakes were all coiled around the Djembe drums. "NO!" I shouted. "WHAT IS WRONG WITH YOU PEOPLE! THERE ARE COBRAS IN THERE!"  Then a child pointed through the window and said, "Well if I can't go in, how come Will can go in?" To my horror I noticed a boy from year 4 in the music room. Oh dear God--I had locked the boy in with the cobras! He was "off with the fairies" as they say--completely oblivious to the danger. "WILL!" I hissed (the irony of why I was whispering to avoid being heard by snakes was not lost on me--the hissing made me feel rather like a snake myself which made me all shivery)and I finally got his attention and managed to get him out of the room unharmed.

Just then someone from the Zoo arrived with a tube of anti-venom and a hook and a large bag. He was in there several minutes before he came and told me that these were, in fact, ROBOT COBRAS, not real ones. I was shocked and embarrassed by the fact that I had been fooled, but he kindly said, "Don't worry Miss, they were startlingly realistic. Anyone not a professional like myself would have been fooled."

Then I woke up. So yeah...just a normal night for me. But I did say to Spiderman, "I wish I could have found out who was controlling the robot cobras" and he replied:

IT WAS ME.
(which cracked me up)

So yeah, just an average day for us as a married couple. Sweet dreams!
Posted by Heather Tisdale at 05:39