What separates us from the animals is our ability to recycle. And sometimes a pane of glass.

This is the last chapter of our lovely holiday to Hay-on-Wye and I thought I’d talk about the cool animal sculptures in an art gallery we saw (we took the pictures from the outside on Sunday when the gallery was closed so the animals were technically behind a pane of glass) and then the lovely nature walk we went on by the River Wye and our last minute tidy-ups that made it be an eco-friendly trip.

Sunday was the perfect day to wander around town with a camera as most things were shut and hardly anyone was about. There was this cool art gallery that sold items for well into the thousands (and they were totally worth it, but we don’t have that kind of money.) There was a wolf sculpture made out of --not sure what--twisty wire? Twisty vines? 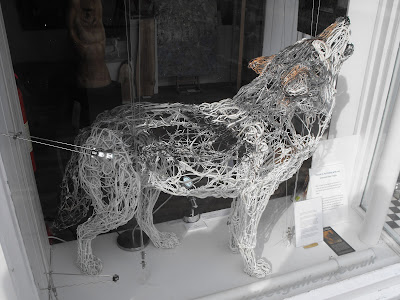 Then there was a fox sculpture called Slinky Malinki which made us laugh as that is the name of a sneaky cat in a children’s book. The fox was made out of--not sure what--wires or vines covered in mud or clay. But the best bit was that it was eating a cupcake. 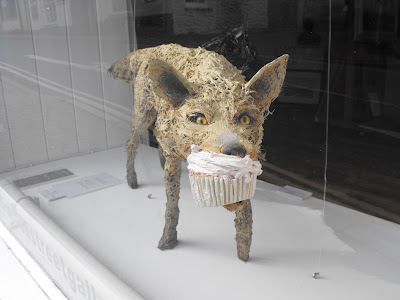 This, at first, seemed out of order but then we once saw a squirrel eat a mince pie at Christmas and recently saw a squirrel dragging around a Starbucks coffee cup with the dregs of coffee in it so anything is possible.

There was also a cooler wolf--but he was inside and partially obscured but he was definitely made of metal--wires and cogs and steel wool. The picture isn’t great--but you get the idea.

While those were groovy animal sculptures, this was not. Some eejit had a dead animal head hanging in the window that he had garlanded with flowers. I found it sad and a bit repulsive. 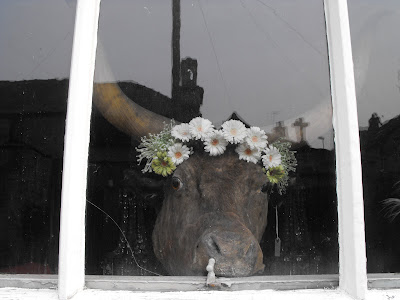 Then we ambled on down to the river. 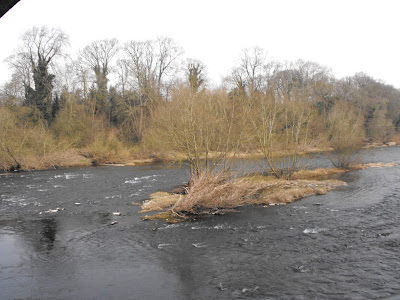 There was a bridge spanning the river and this was underneath.

Have you ever played Pooh Sticks (for you heathens who don’t know, it is when you stand on a bridge and drop a stick with a friend and then race to the other side to see whose stick came out first. Winnie the Pooh and Piglet used to play in the Hundred Acre Wood) and your stick never came out the other side? That’s because it was log jammed under the bridge like this: 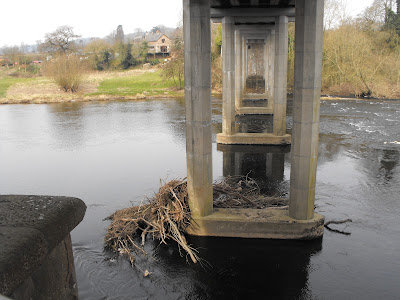 There were all sorts of lovely trees with twisty vines like this one. I like the contrast of the bark, the vines and the leaves. 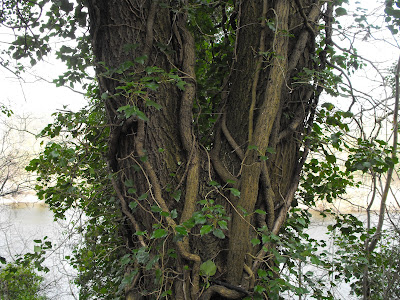 We also spied some lovely flowers who were blooming despite the cold. 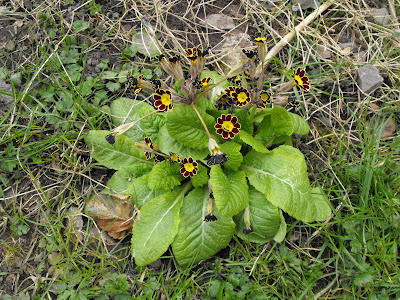 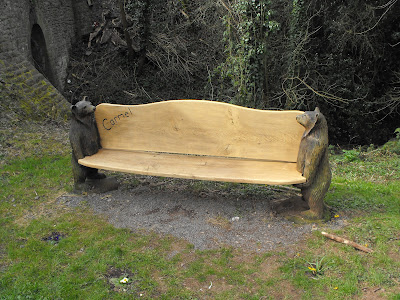 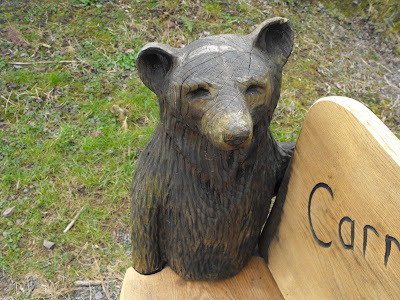 Time for a joke break:
Q: what do you call a man who lives in a hole in the ground?
A: Warren! 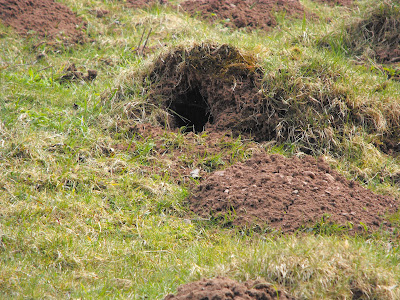 We saw a sign that said “Warren” and sure enough the hillside was covered with holes and so we knew that this was rabbit warren. Sadly we saw no rabbits as it wasn’t dawn or dusk when rabbits come out to eat.

On Monday we rested up, tidied up the cottage and got packing again. We have done this self catering cottage thing 3 other times and it is a lovely and cheap way to go. Much cheaper than a hotel and you never have to pay to eat out. The only disadvantage is it often is very wasteful. I am a confirmed user of family cloth (google the term if you really want to know) and I hate going back to regular scratchy toilet paper for a week. Plus you often can’t recycle or compost and so you end up throwing away bags and bags of rubbish which makes us incredibly sad. At home we fill up a black bin bag about once a month (a few times up to 6 weeks) -without recycling or composting that would be filling up more than one bag a week. But luckily, this place was different!

We first noticed that there was a compost caddy in the kitchen and the dude who let us in and showed us around told us to use the biodegradable bags and when the caddy filled up we could put the bag into the larger compost bin outside. We were hugely happy and proceeded to compost four bags of fruit and veg peelings over the week. They also had kerbside recycling collection, but sadly not on the week we were there. Like most places in the UK--one week is domestic waste and the other recycling. But all was not lost! When we crossed the border into England to do our shopping there was a whole row of recycle bins outside the Co-op so on the Monday we marched back down with a big sack of tins, glass, plastic, paper and cardboard and recycled the lot. The only thing we couldn’t recycle that we normally do was tetra packs. In the end we only had a small bin bag to throw away. Hoorah and lashings of ginger beer!

So that was the holiday in Book Town. It was wonderful to get away and read and rest and just be ourselves. I know this wasn’t everyone’s idea of a good time, but we have learned that you have to do what makes you happy. We changed our lives by selling everything and taking that leap of faith to move across the world to another country--one that we have never regretted. These last nine years have been the happiest of our lives. 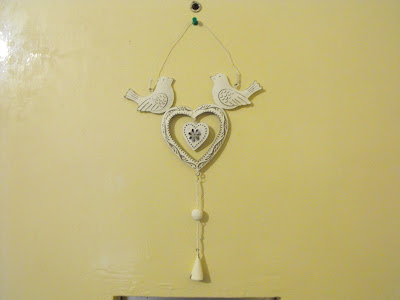 The last souvenir we bought was this whitewashed metal hanging doo-dah of 2 love birds (or love boids as we call them in my family) with a little tinkle-y bell at the bottom.   I know we’ve had a running joke with my Mum for years about “No boids!” because of her tendency to cover the Christmas tree with artificial ones, but this seemed fitting. Right before we left we were told that Spiderman has been promoted at the London Zoo. He has been a volunteer there for two years now--just generally helping out and being useful and friendly, but now he’s been promoted to animal specific volunteer and will be working in the aviary  with the boids. I am so proud of him and his commitment to animal welfare and we thought that some love boids hung on the back of  our front door would remind us every day of our lovely holiday and the deep love we share.

Posted by Heather Tisdale at 03:24