One of the pod people

I never thought I’d be one of the pod people. You know, those people plugged into headphones carrying an iPod. I have resisted most forms of modern technology. I do not carry a mobile phone, we don’t have a telly or the internet at home. I type all my blog posts on a laptop at home, put them on a memory stick and then paste them at the library.

But here I am. A confirmed pod person. Spiderman bought me a very lo-tech cheap one when I went in hospital several years back. It was perfect for what I needed then--entertainment to take my mind off the fact the my 2 kilo uterus had been removed and I had a whopping great scar held together with staples in its place. But as I grew more tech savvy, I missed things like a menu or a search function. You had to just wait for the song you wanted to come round again. You could  go forward and backward but it really drained the battery--it is was a real battery not a rechargeable one so I was forever toting used batteries to the recycle box as they are toxic to throw away and then buying more.

A bit like Pinocchio, I dreamed of being a real pod person.  But have you priced them lately? I mean they are like £180  but have 160GB so it is worth it, but please. I am cheap to the core and have trouble spending out on myself.    I would NEVER have shelled out for a proper iPod despite my heart‘s desire. My beloved step dad Jamie was kind enough to send me some money to purchase one. He had cancer and he knew he was dying and wanted everyone he loved to have a gift from him. Every time I use it I think of him.

I  have loaded lots of tunes onto it and have been really getting into pod casts. When I first mentioned it to Spiderman  he was a bit incredulous. What do you know about pod casts? He seemed to say as he raised his eyebrow at me in that sarcastic way he does. Well quite a lot, actually smacktually. Thank you very much.  There is a whole vegan radio network out there and you can listen to interesting pod casts of vegans talking about cookbook reviews, food, animal rights issues in the news and much, much more. I love to listen to other vegans who live , like me, in a non-vegan world. My favourites so far are Red Radio, The Vegan Option and Our Hen House--all free off of i-Tunes. My new super favourite is Colleen Patrick Goudreau’s Food for Thought.  Also free off of i-Tunes. Check them out!

I listened to a fascinating interview with my favourite vegan poet Benjamin Zephaniah who talked about a man named Al-Ma'arri who lived from 973-1057. According to Wikipedia:

He achieved fame as one of greatest of Arab poets. Al-Ma'arri was stricken with smallpox when four and became blind. As he grew older, he was able to travel to Aleppo, Antioch and other Syrian cities, learning by heart the manuscripts preserved there. Al-Ma'arri spent 18 months at Baghdad, then the center of learning and poetry, leaving to return to his native town. There he created the , a large collection of verses that contrasts from traditional works by its irregular structure and in the opinions it contains. His presence in Ma'arra drew many people, who came to hear him lecture on poetry and rhetoric.


He was an early vegan and animal rights activist writing beautiful poems like this one all those years ago: It refuses to format properly--so sorry about that. read it anyway.


I No Longer Steal from Nature


And do not desire as food the flesh of slaughtered animals,


Or the white milk of mothers who intended its pure draught


for their young, not noble ladies.


And do not grieve the unsuspecting birds by taking eggs;


for injustice is the worst of crimes.


And spare the honey which the bees get industriously


from the flowers of fragrant plants;


For they did not store it that it might belong to others,


Nor did they gather it for bounty and gifts.


I washed my hands of all this; and wish that I


Perceived my way before my hair went gray!

Isn’t that amazing?  The poem really echoes my feelings--why did I wait so late to start living a compassionate life? I’ve been vegetarian since 2002 and vegan since 2004, but now knowing what I know really wish I started on this path sooner. But at least now I know I am living a peaceful life that is healthy for me, the animals and the planet.

Anyway, the pod cast is fascinating.  To hear Benjamin Zephaniah read it in his dulcet tones was a real treat. You can listen to the interview and the academic discussion on Al-Ma’arri here:

I also recently, in my sewing frenzy, decided to sew a wee case for my iPod from some beautiful fabric I was gifted by a friend. I had been keeping it in a brightly coloured children’s sock, but decided I needed a posh case made out of tapestry fabric and lined with acetate. 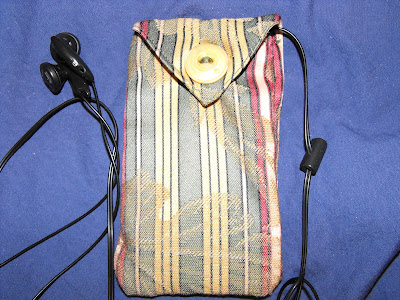 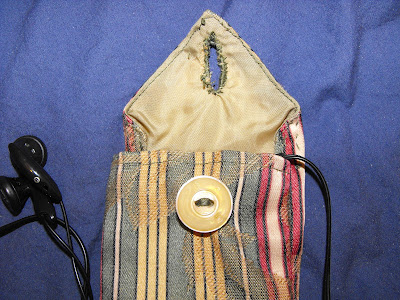 I love the little bag--it is just the right size for my iPod and it closes with a decorative button. And we all know decorative buttons make everything better. FACT. I also really love that it only cost me 15p to make (the cost of the button) as I already had the fabric. I can wrap the wires around it to keep them from getting tangled. It fits in my apron pocket or the outer pocket of my handbag. Perfect.

What do you keep you iPod in?

Posted by Heather Tisdale at 23:40