Southern Belles May Be Stronger Than You Think 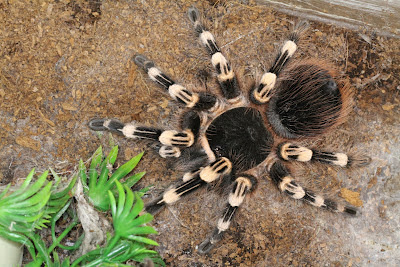 Oh what a night.

Our lovely southern belle Brazilian white knee spider Blanche DuBois has been through the the wringer and has given us quite a fright.

It all started on Saturday. We had friends over for dinner and Blanche was just strutting her stuff and showing off for company. She was walking up and down (stopping occasionally to scratch her bum in an adorable way) and then she went to her water dish and had a big ole drink. She also was seen to be laying down a web mat and we thought, "Aha, she is preparing for a moult!"

Well yesterday at about 2:00 I observed her doing what we call "spider yoga" where the spider stretches their upper back (much like the cobra pose in yoga) to loosen their carapace. When a spider moults it does lots of stretches to make their carapace (back plate) pop off so they can easily pull out their new body from the old one--like pulling your arm out of a sleeve.

Here is where things went a bit pear shaped. A spider normally moults on its back. It is the best way to be able to loosen their carapace and then roll to the side to pull out of the old skin. At 4:30ish we noticed she had rolled awkwardly on her side no where near the web mat she had made.

We thought maybe she would roll from the awkward side pose to her back but she never did. This was potentially dangerous as legs under the bottom of her cannot flex enough to break the carapace. Normally a spider flips, does stretchy stretchy and then starts to pull out. The whole things can take several hours. But at this rate, in that position, she might struggle to get her carapace off at all and die.

We decided to skip Welsh class as she might need our help and I am so glad we did.

As she lay awkwardly on her side, at first her top legs were straight up in the air but as the hours passed they sank down limply and stayed there. At first we thought, "Great! She is finally moving her legs!" but then it seemed as if she had just let them collapse and curl up. Was it the death curl? By now she should be pumping her legs back and forth like pistons to pop off her carapace and she just wasn't.

Why had she not flipped to her back? Why had she not pumped her legs? Was she ill? Was she just too old and weak to flip all the way over? We inherited her 7 years ago and so she was around 12-13 years old. She had seemed fine on Saturday, unlike Lily Rose who looked frail in her old age, Blanche had looked robust. It was a puzzle.

Maybe she was too dry to split her old skin? So Spiderman added extra water to the tank to build up humidity and we moved the space heater closer to keep her warm. Spiderman dropped water from a pipette (dropper) on all her joints that we could reach  to try to lubricate them. She didn't react at all.

By midnight she had not moved at all and we thought she was dead. She seemed to be stuck in the moult--being greatly weakened and not able to push herself through it. Even if she did manage to get her carapace off if the joints were too dry she could lose multiple legs or tear her abdomen coming out and bleed to death.

She lay there awkwardly on her side half curled up and we thought she was dead. You can't tell. You can't check for breathing or a pulse because they don't function like that. It was agony.

We cried and did not know how to help her.  We talked about how and where we would bury her in the morning. We thought if she is not dead now, she will be soon. We felt helpless.

Exhausted, we climbed into bed and talked about all our favourite memories of her and then slept fitfully. This morning we woke and were both afraid to go and see. What if she had torn herself in half trying to get out? We went in and looked and she had done it. She had moulted. Her new body was still on its back --too weak to flip itself over. Her mouthparts were covered in bloody looking flux. She might have torn her oesophagus. She wasn't moving at all.

This was worse than last night. What if she had finally managed to moult only to die from the exhaustion of it? At first we thought she was missing 2 legs but it turned out she was just laying on them awkwardly.

Was she alive? Was she dead? We could not tell.  My throat felt sore from anxiety.

We waited. An hour later we noticed she had moved just a little bit. Was she alive? Then after another hour or so she had flipped herself back upright. She was alive.

But for how long? It was a very traumatic moult. We have never seen one like this. She might have internal damage. One of her legs looks a bit wonky so she might have some lameness.

All we know is she is a fighter. She is alive for now. We will continue to love her and treasure her no matter what, but this may be coming to the end of her life. Another moult will likely kill her.

I think it was so hard because we were there for it. Every excruciating step of the way. All of our other girls have "died in their sleep." We woke up and they were in the death curl. But to see one suffer and not be able to do anything to ease their suffering is heartbreaking. Her moult lasted over 10 hours. Most likely up to 15 hours. For her to be in pain and distress for that long must have been horrible.

Poor Blanche DuBois.  Do what you need to do, baby. If you need to slip away then we will miss you or gather your strength and live a bit more.

We love you darlin'.

Posted by Heather Tisdale at 06:30