Goodbye Polychrome, spider of many colours

Sadly, we must say goodbye to our tiniest of the Spiderbabes--Polychrome. Polychrome was our second arboreal spider (a tree climber as opposed to a ground dweller) who was preceded in death by her arboreal cousin Pirouette.

We brought her home when she was no bigger than a popcorn fart (as my grandmother Sweetie used to say). It is true. She was teeny tiny. No bigger than my thumbnail. 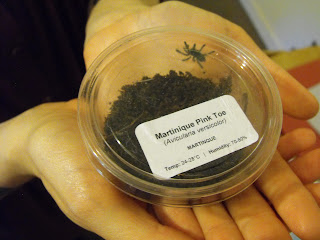 She was an avicularia versicolor which meant she would change colour as she aged. She would start off pale blue with a metallic sheen and gradually  grow up to have a metallic green carapace and iridescent red hairs on her legs. She would also stay pretty small--arboreal spiders generally are smaller than their terrestrial cousins.

She was named after Polychrome the Rainbow's daughter from the Oz books as she was colourful as that beloved character.

This is how Polychrome was portrayed in the Marvel Comic Oz illustrated by Skottie Young. 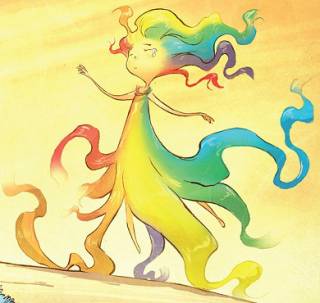 That's pretty much how she seemed to us. Like a little rainbow fairy. She was tiny--about the size of a 50p coin and you saw her very rarely. Being arboreal she spent most of her life in a tube shaped web in the corner of the tank. You might see a little leg poking out waving hello, but at night--if you were lucky--she would come out to hunt or get water.

Today we noticed she was down on the substrate during the day.

She wasn't moving and was in the death curl.

Spiderman kindly said that just because you name your spider after an immortal being doesn't mean they will be one.  Poor Polychrome.

But then, after we removed her little body (made even smaller by the death curl) we saw what we had been hoping was not true, but were suspecting was.

And in spider terms, that means a significantly shorter life span. Males tend to die within a year after reaching sexual maturity. She was four--almost five years old. The time fits.

Her abdomen was always really small and narrow--a sure sign of being male but she was arboreal so we hoped that was just part and parcel of being a tiny tree climber. It wasn't.

We put her under the microscope to check for any signs of disease (thankfully there were none) and we saw the two clinchers.

No epigyne which is the female genital opening. When Blanche was having that bad moult recently (which thankfully she survived) where she was rolled on her side we had a very clear view of her epigyne--it was HUGE. Polychrome had none.

Her palps had a definite largeness about them--wide and flat. Ready to fill up like balloons full of sperm when the time was right. We looked for tibial hooks that male spiders use to hold back a female's fangs while mating, but couldn't find any. We looked up avicularia versicolour in one of our reference books and they are one of the species which don't have them--no wonder we couldn't find them.

So she was definitely a he.

Posted by Heather Tisdale at 12:20