Which basically means--Library Monday, but doesn't sound nearly as nice in English as it is not alliterative like it is in Welsh.

I am a big fan of the public library.  I will admit that when we lived in Louisiana I did not use it as much as i should have. I mean, you had get in the car and drive there which was a right pain in the arse.  Though there were closer branches, i preferred the Main Branch downtown, but it was far away and involved navigating those weird one way streets of downtown Alexandria.

But since we have moved to the UK it has become my lifeline. Literally. Now that we live car-free and walk everywhere I got to the library several times a week. Not only to get books but also too read the newspaper and use the computers for lesson planning and printing. I love it there and everyone on the staff knows me  by name.

it's a bit like the bar in Cheers except without the alcohol.

I am always interested in what other people are reading. When i talk to children it tends to be the first question that I ask. Every day at my old school in England I had at least half a dozen children come to me voluntarily before school, on the playground etc to tell me all about the book they were reading. many children kindly said, "I can let you borrow the book when i finish it, Miss."

Even now, on Wednesdays when i tutor H *always* bring me his latest book to share.

It warms my heart.

I am an eclectic reader. i like fiction and nonfiction, cookbooks and craft books. Science and religion books as well good old fashioned who-done-it mysteries. I thought it would be fun to see what I checked out this week: 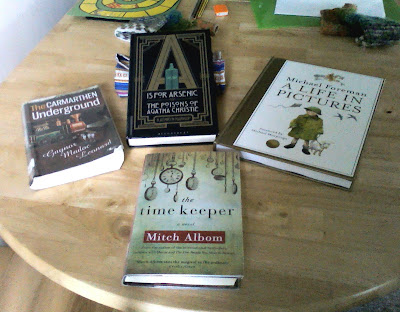 I was intrigued by the book called The Carmarthen Underground because that is where we live. I finished this book last night. it was alright--not brilliant by any means, but a fun romp about a secret undercover intelligence agency right here in our town with lots of familiar landmarks (The entrance to the headquarters was next to the (now defunct)  Wimpy Burger and one character lived on Little Water Street) plus it was peppered with Welsh--lots of "Sut mae'r mynd? (how's it going?) and the affectionate tag bach meaning little one used in speaking. Our friend Arwen says that all the time to me,  hello bach, come give me a cwtsh. Which basically means--Come here darlin' and give me a hug.

I just started on the book A is for Arsenic. it is a fascinating book about all poisons used in Agatha Christie books  What the poison is, it's chemical make-up, how and when and by whom it was discovered, what the effects are, how it features in her stories, other stories where the poison features and any real murder cases where it was used. Fascinating stuff!

Spiderman was a bit worried when i brought it home as I do all the cooking thinking I might be trying to poison him to get all his money and then we had a laugh because he has no money!

The other books I am not ready to start yet. One is a Mitch Albom book--I have liked everything i have ever read by him. I highly recommend Tuesdays With Morrie and The Five People You Meet in heaven.

The other is an autobiography in pictures by author and illustrator Michael Foreman.

What are you reading?

Posted by Heather Tisdale at 08:01