Ain't Nothin' Wrong With That

Happy new year's eve, everyone! I hope 2017 will be a great year for us all. Lots of trials are ahead, so may we meet them with Grace and Love.

It is tradition in the American South to eat special foods on New Years Day. So i am posted this a day early in hopes that you can make this for yourself and your family tomorrow.

You *must* eat black eyed peas, cabbage or other greens and cornbread on New Years Day. FACT. The foods represent luck and prosperity--the black eyed peas standing in for coins and the greens for dollars (or in our case pound notes) and the cornbread for gold.

To quote Chris Rock: Cornbread. Ain't nothin' wrong with that.

How did this tradition come about? Is it only something people do south of the Mason Dixon line? According to gosoutheast.com:

Why Are Black Eyed Peas Good Luck?
The practice of eating black-eyed peas for luck is generally believed to date back to the Civil War. At first planted as food for livestock, and later a food staple for slaves in the South, the fields of black-eyed peas were ignored as Sherman's troops destroyed or stole other crops, thereby giving the humble, but nourishing, black-eyed pea an important role as a major food source for surviving Confederates.


This was a tradition I struggled with as a child. I hated cabbage. I am still not overly fond of it. But these days I love kale (which is in the cabbage family) so we have some sort of Cajun black eyed peas and kale dish to honour our Louisiana heritage.

Black eyes peas are often a meal I just throw together without a recipe. Cook an onion and a green pepper and garlic and throw in some black eyed peas. Add a squidge of tomato puree and a splash of tamari soy sauce and a dash of liquid smoke. Maybe a splash of water if it is sticking. Throw in some Cajun seasonings to taste (we like a Tablespoon of spices) then add some sauteed kale and serve over brown rice or cornbread. This is crazy delicious and comes together quickly. Plus it uses up the green pepper in the bag of three coloured peppers--you know what i mean. The green pepper everyone saves for last. That one.

But this year I decided to make a vegan version of Hoppin' John. A vegan version because Hoppin' John traditionally used a ham hock or some other meaty thing to flavour the broth. I can flavour my broth just fine thank you very much.

It is basically the same recipe as above just with 4 cups of broth and a half cup brown rice mixed in. Making it a bit more soupy. My recipe is based very loosely on the one from the cookbook Vegan on the Cheap.

I actually had to make it with a red pepper (GASP!)  because I had already used my least favourite green pepper in black eye peas and curried yogurt on Friday night. What can I say, the green one just goes well with black eyed peas.

Attention! I have just time travelled from the future of this blogpost to say if you want cornbread with this (and you do) then you need to make the cornbread first, so scroll down to see that recipe. Make it first and the scroll back up and make the Hoppin' John. Unless you have a time machine as well. In that case make it in any order you choose. Make it next Tuesday for all I care. Just make it. 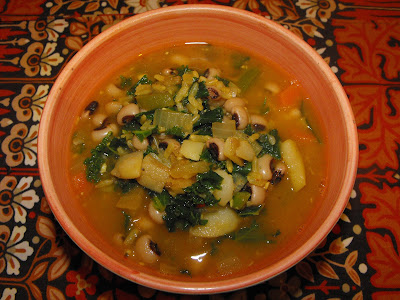 Hoppin' John Soup
You need:
1 white onion, finely diced
1 pepper, probably the green one, finely diced
1 carrot, finely diced
enough garlic to scare the vampires
100g which is about 3-4 cups worth of kale, de-stemed and and torn into tiny bites. We just buy a 200g bag and divide it in half and use it over two meals.
Squidge of tomato puree
splash tamari or soy sauce
1 tsp liquid smoke
Cajun spices to taste
1.5 cups black eyes peas--1 tin drained and rinsed or cook your own
4 cups hot broth
1/2 cup brown rice
optional: throw in a potato or mushrooms if you have them

1. Saute your onion and carrot and pepper in a bit of oil or water until softening. Add your garlic and cook just a minute or so more.
2. Add your tomato puree and tamari soy sauce to deglaze the pan. Add your spices and stir to coat your vegetables.
3. Add 4 cups hot vegetable broth and the rice. Bring to the boil and reduce heat and simmer until rice is cooked. Our brown rice takes around 25 minutes.
4. Add in the black eyed peas, kale and liquid smoke and simmer until kale has wilted and cooked down--about five minutes. Keep stirring to make the kale wilt faster.
5. Serve over cornbread.

Yeah, i should have mentioned to start your cornbread first. What I need is a time machine to go back to the beginning of the recipe and write Make the cornbread first. Failing that, hopefully you will read the whole blogpost before you start.

Cornbread tastes different depending on where you grew up. The more south you live, the less sweet your cornbread is and the more north you go, it is almost like a cake. I  once saw a cornbread recipe that used 2/3 cup maple syrup. It was clearly written by a northerner.

I am not one who likes a completely unsweetened cornbread. I like mine ever so lightly sweetened. My recipe is a love-child between the cornbread recipes by two of my favourite cookbook authors--Dreena Burton and Isa Chandra Moskowitz. I took the best elements of each and made my own recipe. This is my take on how cornbread should be. 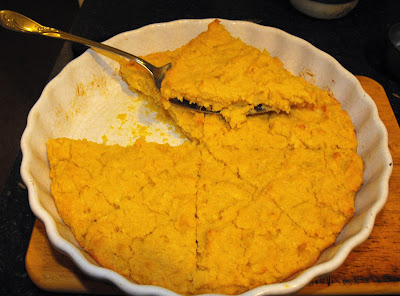 1. Preheat your oven to 180C/350F. Grease an 8 x 8 square pan.
2. In a blender, blend the milk, vinegar and HALF the corn to make a sort of creamed corn. Let it set aside to curdle and go all tangy and yum like buttermilk.
3. Sift together the flour, polenta, baking powder, onion powder and salt.
4. Mix wet into dry and add the oil and liquid sweetener and remaining half cup of corn. You can add the oil and sweetener to the blender, but it makes it harder to clean so i don't
5. Pour into prepared pan and bake 28-32 minutes until browning at the edges and slightly pulling away. Or do the toothpick test.
6. If you make it GF, then let it cool for about 15 minutes before you slice to prevent crumbling.

Serve your lovely Hoppin' John over the cornbread so it can really soak up all the soup. Sorry there are no photos. I will use my time machine to travel to tomorrow and add some photos. But you'll have to wait until tomorrow to see them!

I hope this brings you luck and prosperity in the new year!
Posted by Heather Tisdale at 03:10