What We Ate Wednesday--Red Beans and Rice

Hello lovelies! As I realised that I had been posting lots of chickpea recipes, I thought I would post  a recipe featuring another of my favourite cheap beans--the kidney bean. I never used to be a fan of the ole "red bean" but these days at 33p a tin and great source of  folate, dietary fibre and copper as well as  a good source of manganese, phosphorus, protein, vitamin B1, iron, potassium and
magnesium they make the menu quite often.

Red Beans and Rice are a traditional Louisiana food. They are often cooked for ages in a slow cooker until the beans are all soft and falling apart. They also are often accompanied by smoky sausage that is cooked in with the beans to give it flavour.

But I don't have ten hours or a slow cooker and I don't need to use smoky sausage to get that delicious smoky flavour because I have a secret ingredient. Shhh...don't tell anyone. But after you read this, run don't walk to your local grocery shop (or if you are in the UK and can't find it locally then go to Amazon and place an order) and buy yourself some Liquid Smoke.

This stuff is great. It give a real smoky aroma and taste to food that mimics the thing you liked about meat, but without the cruelty. OK, maybe you should tell people. In fact, tell everyone you know that they can get the flavour they want without anybody having to die.

I do a bit of a cheat on my Red Beans and Rice to break down the beans so they are that sort of broken down soup texture from my childhood without the ten hour wait. I use my trusty food processor to blend half the beans. Also, you know those cheap, generic plain label tins of kidney beans you see on the bottom shelf of the supermarket for pennies and were afraid to try as the beans might be all broken and not whole? This is the perfect recipe for them because you are going to crush them anyway, so don't spend the big money on posh brand name kidney beans for this recipe, OK?

This recipe serves two, but is easily doubled. I served it to my Mum and stepdad Carl when they came to Wales on their honeymoon and they enjoyed it. I like to use brown rice as that's they way we roll, but white rice is traditional, so use what you like. I also like to serve it with creamed corn as I think it looks pretty and the tastes go well together. if you live in the US, you can probably just open up a tin of creamed corn and blurp it in a pan and heat it up, but in the UK I have to make my own, so I'll include a recipe down below. 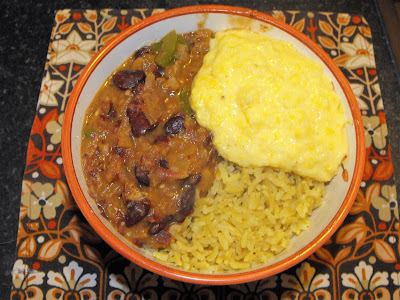 It should be noted that the picture only shows a small bit of creamed corn because I wanted to show off the rice and make it "decorative" in the photo. After I took the picture i poured more on and mixed it all together, as that's how I like to eat it, but do what you want.


Red Bean and Rice
1 tin cheapest kidney beans, drained and well rinsed
1 onion
1 green pepper, diced small (not traditionally in Red Beans and Rice, but the bitter green pepper compliments the Cajun spices. plus it is a way to use up that red headed step-child of the three pack of peppers)
lots of garlic
1 -2 TB soy sauce or tamari
1 tsp liquid smoke
1 tsp Cajun seasonings (or more, but I think this  flavours them just enough)
1 cup veggie broth
1. Use your food processor to chop your onion. It will chop them really small and will thicken the beans without a ten hour cooking time. Cook the onions in a big pot with a splash of oil while you do the rest of it.
2. Wipe out, but don't bother to wash your food processor and add 3/4 cup beans, all the garlic you want, plus the one cup veggie broth and blitz until broken down. It will never get super smooth as there will be bean skins. Just get it pureed and don't sweat it, OK?
3. Add the soy sauce or tamari to deglaze the pan and get any brown bits up and stir to coat the onions and add the bean mixture, the rest of the beans you didn't blitz, the green pepper, the liquid smoke and the Cajun spices.
4. Simmer for about 30 minutes. Because I use easy cook brown rice, I start it now and let my red beans cook until the rice is done.  If you are doing the creamed corn you should be making it and then heating it when the rest is nearly done. .
5. At the end, use the back of the spoon to mash the remaining beans a bit. Taste for salt. My Cajun spices have salt as the first ingredient, so it is as salty as I need it to be.

Creamed Corn
Cream style corn is traditionally made with just corn, water, salt and sugar, but this one uses non dairy milk which makes it super creamy, but feel free to use water. I adapted this recipe from Isa Chandra Moskowitz's Appetite for Reduction. This recipe is also easily doubled.

In your blender put the following:
1/2 cup non dairy milk
1 tsp sugar
pinch salt
2 tsp starch--I used tapioca starch, but you could use corn starch (cornflour to my British peeps)
1.5 cups frozen corn that has been defrosted in boiling water and drained

That's it. A bit of Louisiana flavour in Wales. One that tastes like my childhood except without all the meat, but still just as tasty.  Bon Appétit!

Posted by Heather Tisdale at 23:39