Hello lovelies! When we are on holiday, we often eat ready-made meals from M&S as they have a good variety of vegan and gluten free salads that are 2 for £4. Several times I have fallen in love with the salad and carefully torn off the label with the ingredients and then gone home and attempted to make a copycat version of it for less. And by less I mean less money and less plastic for while these meals are delicious on holiday, they are all just excess plastic. /sadface/

When we were on our anniversary trip the Magical Mystery Tour, I bought a new salad that M&S had on offer--Supergreen Salad.

I figured I could make a version of my own at home.

Firstly, I had to decide what ingredients to use. I always have peas and edamame in my freezer, so I knew that would be a given. We've also always got apples. Cucumbers are cheap and this would only use half (if that) so the rest could be used for another recipe. Even though it wasn't in the original recipe, this would be a great way to use the dreaded green pepper that comes in the three pack of peppers. I also decided to use kale instead of spinach just because we like it better and it lasts better in the fridge without going slimy. Mint sauce is also a staple in my kitchen as it is 55p a jar and gives a really nice flavour punch to food. I don't know if my American friends can find mint sauce in the States. Here, it is often eaten as an accompaniment to lamb (poor lambs *sob*) but it vegan and delicious.  I debated about buying a green apple like a Granny Smith for 35p, but decided to just use the Gala apple we already have and put that money towards the apple juice. I also decided to get some nice pressed cloudy apple juice from Lidl for £1 that was really delicious. Because I knew I would want to make this again, I froze enough for 3 more meals in the correct proportions and drank the rest.

Here is my version of Supergreen Salad. 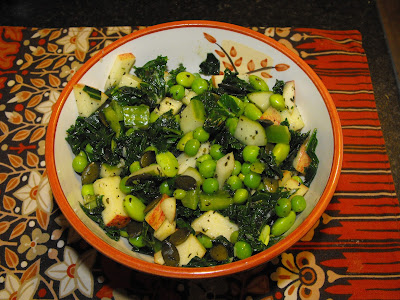 We served ours over brown rice, so if doing this cook your brown rice and when it is nearly finished make the salad.

To do:
1 Destem and tear up the kale..
2. Defrost the edamame and peas in boiling water for 5 minutes, drain.
3. Cook the kale in a splash of apple juice until bright green and softened and add the edamame, peas, apple, cucumber, pepper and the pumpkin seeds. Pour over the dressing.

This is a great summer meal with lots of flavour. try it today!
Posted by Heather Tisdale at 02:29