Hello and welcome to part 10 of Murder Story Monday. This week I explore a version of this tale entitled The Magic Fiddle. This is unusual in that while it may be classified as a “singing bone” tale, there are no bones to sing. The sister who is drowned by the jealous wives of her brothers does not “die”, but her spirit is transferred into some bamboo growing by the river where she drowned. The bamboo, however, does speak and is turned into a musical instrument which ultimately helps her be released from her limbo position as half human/half spirit.

This tale speaks about Bonga Spirits which my research has concluded it is a bit of a redundant phrase because Bonga means Spirit in India. So, basically you are saying Spirit Spirit. From what I can gather, a Bonga is a type of spirit who might serve a God, but is not a God itself. I felt I had read other tales like this where the “spirit” of a woman comes out at night and does the cooking and cleaning (why is it always domestic tasks?) and is surprised and freed from enchantment by the man she has been selflessly serving. I have thought and puzzled and looked in our vast collection of fairy tales, but have not been able to come up with an example, despite feeling like I had read one. Perhaps had even read more than one. So, if you can recall such a tale, please leave me a comment.

This particular tale was collected by Joseph Jacobs in 1892 in a book entitled Indian Fairy Tales. He in turn got the story from a book called Santal Folk-Tales by A. Campbell which was published in 1891. 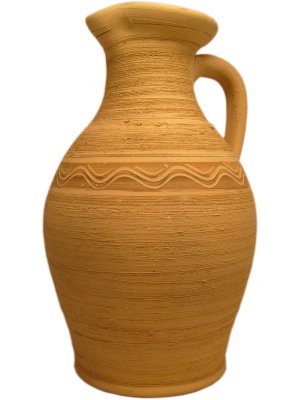 Once upon a time there lived seven brothers and a sister. The brothers were married, but their wives did not do the cooking for the family. It was done by their sister, who stopped at home to cook. The wives for this reason bore their sister-in-law much ill will, and at length they combined together to oust her from the office of cook and general provider, so that one of themselves might obtain it. They said, "She does not go out to the fields to work, but remains quietly at home, and yet she has not the meals ready at the proper time." They then called upon their bonga, and vowing vows unto him they secured his goodwill and assistance; then they said to the bonga, "At midday, when our sister-in-law goes to bring water, cause it thus to happen, that on seeing her pitcher, the water shall vanish, and again slowly reappear. In this way she will be delayed. Let the water not flow into her pitcher, and you may keep the maiden as your own."

At noon when she went to bring water, it suddenly dried up before her, and she began to weep. Then after a while the water began slowly to rise. When it reached her ankles she tried to fill her pitcher, but it would not go under the water. Being frightened she began to wail and cry to her brother:

The water continued to rise until it reached her knee, when she began to wail again:

The water continued to rise, and when it reached her waist, she cried again:

The water still rose, and when it reached her neck she kept on crying:

At length the water became so deep that she felt herself drowning, then she cried aloud:

The pitcher filled with water, and along with it she sank and was drowned. The bonga then transformed her into a bonga like himself, and carried her off.

After a time, she reappeared as a bamboo growing on the embankment of the tank in which she had been drowned. When the bamboo had grown to an immense size, a yogi, who was in the habit of passing that way, seeing it, said to himself, "This will make a splendid fiddle."

He now and then visited, when on his rounds, the house of the bonga girl's brothers, and the strains of the fiddle affected them greatly. Some of them were moved even to tears, for the fiddle seemed to wail as one in bitter anguish. The elder brother wished to purchase it, and offered to support the yogi for a whole year if he would consent to part with his wonderful instrument. The yogi, however, knew its value, and refused to sell it.

It so happened that the yogi some time after went to the house of a village chief, and after playing a tune or two on his fiddle asked for something to eat. They offered to buy his fiddle and promised a high price for it, but he refused to sell it, as his fiddle brought to him his means of livelihood. When they saw that he was not to be prevailed upon, they gave him food and a plentiful supply of liquor. Of the latter, he drank so freely that he presently became intoxicated. While he was in this condition, they took away his fiddle, and substituted their own old one for it. When the yogi recovered, he missed his instrument, and suspecting that it had been stolen asked them to return it to him. They denied having taken it, so he had to depart, leaving his fiddle behind him. The chief's son, being a musician, used to play on the yogi's fiddle, and in his hands the music it gave forth delighted the ears of all who heard it.

When all the household were absent at their labours in the fields, the bonga girl used to come out of the bamboo fiddle, and prepared the family meal. Having eaten her own share, she placed that of the chief's son under his bed, and covering it up to keep off the dust, re-entered the fiddle. This happening every day, the other members of the household thought that some girl friend of theirs was in this manner showing her interest in the young man, so they did not trouble themselves to find out how it came about. The young chief, however, was determined to watch, and see which of his girlfriends was so attentive to his comfort. He said in his own mind, "I will catch her today, and give her a sound beating; she is causing me to be ashamed before the others." So saying, he hid himself in a corner in a pile of firewood. In a short time, the girl came out of the bamboo fiddle, and began to dress her hair. Having completed her toilet, she cooked the meal of rice as usual, and having eaten some herself, she placed the young man's portion under his bed, as before, and was about to enter the fiddle again, when he, running out from his hiding place, caught her in his arms. The bonga girl exclaimed, "Fie! Fie! You may be a dom, or you may be a hadi of some other caste with whom I cannot marry."

He said, "No. But from today, you and I are one." So they began lovingly to hold converse with each other. When the others returned home in the evening, they saw that she was both a human being and a bonga, and they rejoiced exceedingly.

Now in course of time the bonga girl's family became very poor, and her brothers on one occasion came to the chief's house on a visit. The bonga girl recognised them at once, but they did not know who she was. She brought them water on their arrival, and afterwards set cooked rice before them. Then sitting down near them, she began in wailing tones to upbraid them on account of the treatment she had been subjected to by their wives. She related all that had befallen her, and wound up by saying, "You must have known it all, and yet you did not interfere to save me." And that was all the revenge she took.

This is the last of the Murder Story Monday versions of the Singing Bone Tales which relate to my original research about variations of the murder ballad The Twa Sisters. Stay tuned next week as I delve back into musical murder ballads.
Posted by Heather Tisdale at 23:13