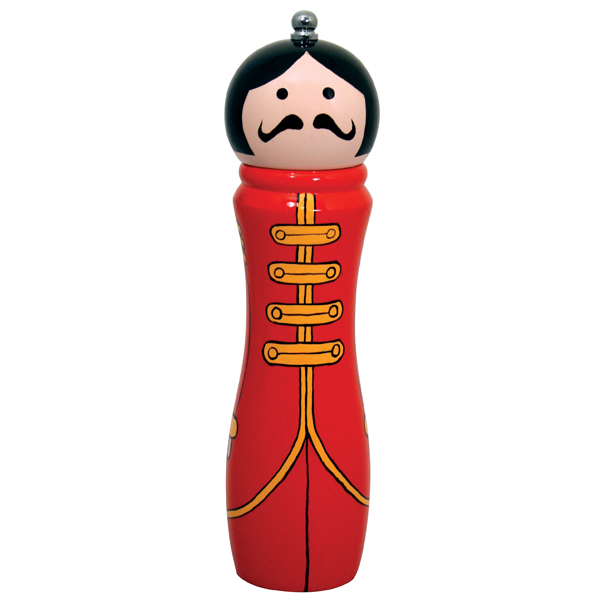 Sergeant Peppermill was adopted into our family on November 26th, 2011. You can read about his arrival here.

He was an integral part of our kitchen and was used daily. In the early years, he was a cheerful fellow who never minded us twisting his head to make pepper come out of his butt. But as he grew older, his joints became stiff and his pepper butt was often constipated. The paint on his face began to peel from over-handling and he grew cranky.

He used to really love being filled with knobbly peppercorns and made it easy for us to do, but as years passed he seemed to resent having his head taken off and peppercorns poured down his neck. In protest, he refused to allow us to put his head back on until all the peppercorns had been poured back out and reinserted with tweezers one by one. We did not begrudge him for this, as he was old and you have to make allowances for the elderly.

Over the past year, we could really sense he was shutting down, so it came as no surprise tonight when we tried to twist his moustached head that it refused to turn. I think he was giving us a message.

Please let me die (he seemed to say).

So it is with great sorrow, that we report the death of dear friend and kitchen companion Sergeant Peppermill. Rest in Peace, my friend.

He will not be discarded or recycled, but his empty shell will stand on the mantelpiece (well, the kitchen shelf) in memory of our heroic friend who ground pepper so lovingly over our food for the last six years. He will be replaced in the kitchen (but not in our hearts) with travel pepper grinder who is not nearly as cute, but a helluva lot easier to fill.

Thank you.
Posted by Heather Tisdale at 14:48