What We Ate Wednesday--Pea Pulao

Hello lovelies. This week I tried a new recipe that I am sure will be added to our rotation of delicious, healthy, cheap meals. It is adapted from a recipe from Hurry the Food Up which you can read here.

The word pulao sounded all exotic, but it turns it out is just a fancy word for pilaf. Whatever you call it, it is delicious. I kept the recipe mostly the same, but added a few more colourful veg that we had lurking in the fridge and a tin of chickpeas to make it more of a meal.

It made 4 smallish servings (or 2 large greedy people size servings!) but could be increased for 4 people my upping the rice to 1 cup and serving it with a salad or sliced cucumbers or something like that. 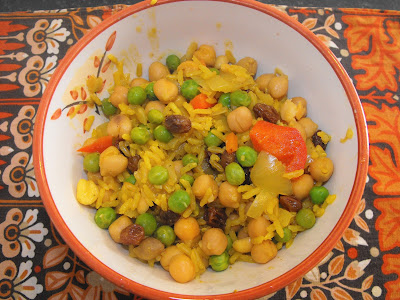 Later you'll need:
handful of peanuts
1 cup defrosted frozen peas
1 tin chickpeas, drained and rinsed
half a red pepper diced and a few small carrot slivers cut into tiny bits (optional but adds colour and flavour)
At the end you'll need:
zest and juice of one lemon
1-3 cloves crushed garlic--depending on how much you like. we did three.

How to:
1.  Put a few teaspoons oil in your biggest pan and saute the onion until translucent.Add the liquid sweetener, turmeric, cumin and salt and stir to coat. (I also stir in 1.5 tsp broth powder at this point as well) Put your kettle on to boil.
2. Add the raisins and the rice and stir to coat. Then add 1.5 cups boiling water from the kettle. Bring to the boil, reduce heat and simmer.
3. When the rice is nearly done add the peanuts, the peas, the chickpeas and optional veg. Continue cooking until all the liquid has been absorbed and everything is hot.
4. Pour over the lemon garlic sauce and stir.

It was really tasty and relatively quick. It was also dead cheap to make. Go and make some pulao today!

Posted by Heather Tisdale at 01:35