Hello and welcome to Murder Ballad Monday. For the past several weeks I have explored different versions of the ballad Polly Vonn, but this week I am moving into more contemporary circles.

When you think of rural murder ballads, I bet the last thing you think about is the alternative/punk band the Violent Femmes.  Their first eponymous album was raw and brash with songs like Blister in the Sun. Their second album Hallowed Ground was more reflective and had an almost country music sound in some places. There were also several  Christian songs like Jesus Walking on the Water which caused conflict between band members as lead singer Gordon Gano was a devout Christian and the other members of the band were atheists. This is an album of contrasts because it also contains the song Black Girls which contains the lyrics I dig black girls so much more than the white girls and I dig white boys so much more than the black boys. 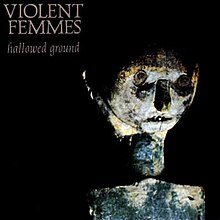 But what really set this album apart for me was the lead song. When I first bought this album on vinyl back in 1984, I was struck like a thunderbolt to the chest by the first song. It was a murder ballad told in first person by a man driven mad by poverty and hunger who in a moment of madness (a moment of clarity?) pushes his younger daughter down a well and then hangs himself when he realised what he had done. There is this chilling line I pushed with all my might, I pushed with all my love which really encapsulates the claustrophobic feeling of the song.

It is an exquisite portrait of the madness that can come through isolation and poverty. It reminded me of the poem School Lesson Based On Word of Tragic Death of Entire Gillum Family by Robert Penn Warren about the father who murders his family with an ice pick as his children are getting ready for school.

According to Wikipedia, Gordon Gano wrote Country Death Song while still in high school. He wrote it one day in 10th grade study hall after seeing a news article about a murder in 1862 where a father intentionally pushed his daughter down a well and then hanged himself in the barn.

I think what makes it more chilling is that it is a first person account. What also really enhances it is this fan made video. It was made as a final project for an animation class and really captures the eerie feeling of madness that compliments Gordon Gano's distinctive voice.

I have included the lyrics below if you would like follow along, but I suggest watching the video as well.

That's all for this week. Stay tuned next week for a trip to rural Georgia.

Posted by Heather Tisdale at 01:00