How To Bathe a Snail

Hello! It's been nearly eight weeks since we adopted the Bronte Snails. Can you believe it? It's been a learning curve because they require much more daily care than the Spiderbabes. We adore our spidery friends and wouldn't trade them for the world, but it has been lovely to have the Snails to interact with as well.

For me, as a person who doesn't get to cuddle many animals due to crippling allergies, the Bronte Snails have been great as I get to hold them. While you technically *can* hold the spiders, the BTS (that's the British Tarantula Society) really discourages it.

The Bronte GALS (Giant African Land Snails) or ACE (Anne, Charlotte and Emily) as they are also known are fascinating creatures. We know a lot about spider anatomy, but have had to brush up on our snail anatomy.

For instance, did you know that snails are hermaphrodites? Yup, they have both a penis and a vagina so if you put two together, they will mate and the larger one will be the female and lay eggs. This is why the Bronte Snails are all living in separate containers.

For what I am about to describe, it might help to know  little basic anatomy. Here is a helpful diagram.

When you look online at How To Care For Your Giant African Land Snail websites (and there are a lot of them) they talk about the importance of keeping your snail moist and warm. They can die if they dry out or get too cold. The Spiderbabes all have heat mats, so we know how to deal with this warmth issue.

We keep the humidity up in their tanks by misting the substrate, but we were finding that the condensation was making it boggy (I was having to siphon out about a Tablespoon of water each day that had collected in a puddle.) Nobody likes to live in a puddle, not even snails. This is an ongoing issue we are still working through.

We kept reading about "Snail Bathing" but kept reading conflicting reports. How much water do you use? If you use too much they can drown. But how much is too much?

Then we found this video:

So, we decided to try it last night as it was clean out the tanks night.

Problem one: The water should be tepid but on the warm side. When you run the tap from our sink it was either HOT or COLD. We could not get warm to save our lives. I have misted the tank with a spray bottle where the water was cool room temperature and have watched the snails suck back into their shells at lightening speed like an undescended testicle. And hot water might burn their little sensitive skin.
Problem two: Even if we could get the temperature right, we weren't keen on the water waste for running the tap that long for each snail.
Problem solved: we filled the sink with tepid but warm water and used a plastic pitcher as a waterfall to pour over their heads.

I cannot gauge the "emotion" that snails have, but I can say they reacted in a way that seemed to show pleasure. At least they did not show displeasure.

Often in their tanks, you see their foot (see anatomy above) quite big and spread out beneath their shell with their head close to the mantle edge, but often don't see them "stick their neck out." I held them the opposite way from the video so I could see their wee faces. The point of the shell was facing my fingers and their head was looking at me.

As soon as Spiderman started to slowly pour the warm water each snail extended their head towards the water and I could feel the foot sliding forward in my hand. In the end each one extended up my wrist into the waterfall and was extended between 3 and 4 inches long. And each of them did that adorable thing they do when you put their favourite food cucumber in their tank--one eyestalk goes up and down like a piston.

I should mention here in the nearly eight weeks since we have brought them home, they have DOUBLED in size. Their shells are now about as big as an egg  (a large egg in Charlotte's case--she's a beast!) Anne comes in in second place and Emily was a titch when we brought her home, but is catching up with her sisters.

Remember that when fully grown the Bronte GALS will look like this: 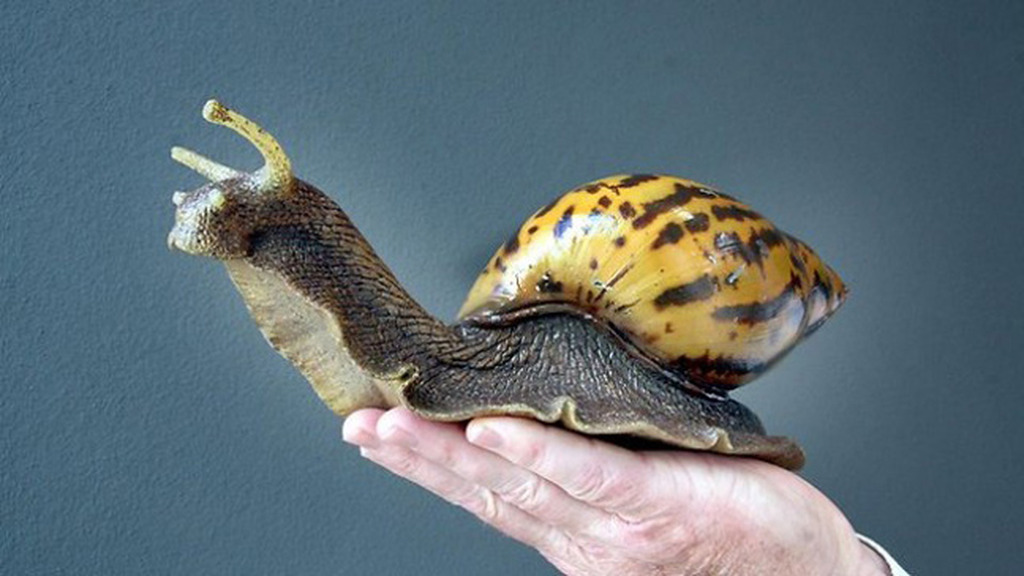 After their bath we put them in the travel box while we cleaned out their tanks and gave them fresh substrate. Each one stayed extended for a long time and so I managed to snap a good picture of each of them.

In ACE order:
Emily has had some shell issues. The others instinctively went to their cuttlefish bone and ate some for calcium every day. Especially Charlotte. She nearly ate her whole cuttlefish bone which is why she is so much bigger--more calcium = bigger shell. But Emily never went on there. We had to teach her how by putting her food on there so she'd get lured over to the cuttlefish and hopefully figure out how to eat some calcium. We also started supplementing their calcium by sprinkling limestone flour (calcium carbonate) on their food.

Is there such a thing as a Special Needs Snail? Maybe. If so, that might be Emily.

Anyway, because she wasn't eating enough calcium, my thumb pushed through her shell a month ago when I was trying to pick her up. I cried as I thought i had hurt her. But what she did next was fascinating. 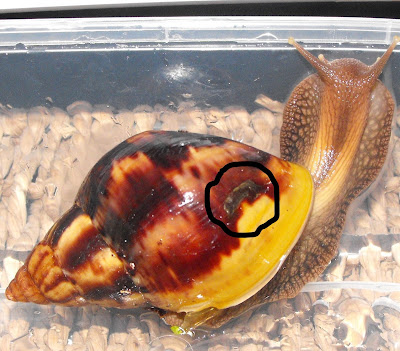 It has been an interesting journey to get to know these GALS. We are so blessed to have these wonderful animals in our lives--the Spiderbabes and the Bronte Snails.

Posted by Heather Tisdale at 03:33