What We Ate Wednesday--Potato Corn Chowder with Bacon Mushrooms

Hello lovelies! Back when we were young and ate the SAD (Standard American Diet) and ate lots of processed crap, this soup was one of our favourites. Basically, you bought a tin of potato soup, a tin of creamed corn, a tin of regular corn and heated it up in a pan and topped it with some cooked bacon.

I dreamed about this soup recently and thought I could veganise it. The results were pretty spectacular. We even served it to company and she had a second helping, so i think that clinches it.

Creamed corn in a tin is pretty thin in the ground in the UK. Tesco website claims they sell it for £1.15 for a 418g tin, but I can buy a full kilogram of frozen corn for £1 and make my own and have sweetcorn leftover for other things, so that's what I did.

Also, we don't eat bacon these days as....and you may not know this.... it is made from pigs. Can you believe it? But since we go by the philosophy of Animals are my friends and I don't eat my friends (thank you George Bernard Shaw) I made bacon mushrooms instead.

I am the first to admit that bacon was one of my favourite meats when I wasn't awake to the horrors of factory farming, but don't worry. There are plenty of cruelty free ways to get your salty, smoky groove on without having to harm a piggie. 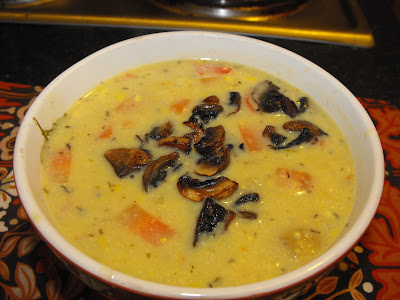 Meanwhile, make your cream style corn:
2 cup defrosted frozen corn, divided (keep half a cup aside)
Pulse or blend in a blender (depending on how broken down you want it to be:
1.5 cup of corn
1/2 cup water or non-dairy milk
2 tsp cornflour (cornstarch to my American peeps) or other starch like arrowroot or tapioca
pinch salt
pinch sugar.

1. Cook your onion, pepper and carrot in a little oil or splash of water until softened then add your garlic and cook for a few more minutes.
2. Add the thyme, potatoes,  white beans, creamed corn, leftover corn, vegetable broth and nutritional yeast and bring to the boil then reduce and simmer.
3. Once the soup has boiled and is simmering, put a sheet of parchment paper on your biggest roasting tin and scoop the mushrooms out of the marinade and lay them in one layer in the pan. Roast for 15 minutes. Add any leftover marinade into the soup.
4. When the mushrooms are done, turn off the oven, but leave them in there to dry out a little more while you do the rest.
5. Check potatoes for doneness. Add your milk or cream or combination of both and with an immersion blend pulse a bit to break down the potatoes keeping some potatoes whole.
6. Remove mushrooms from the oven. they will have shrunk and concentrated in flavour.
7. Reheat soup then serve with a sprinkle of bacon mushrooms on top.

This made 4 large bowls of soup. Enough for company or the two of us for 2 nights.

It just goes to show that you are not missing out on anything when you go vegan. You can have all your old favourites, just done a different way.

Posted by Heather Tisdale at 05:10