What we Ate Wednesday--Stovetop Popcorn

Hello lovelies! If you follow my blog then you know that we have been seriously trying to cut down on the waste we generate. So, for the next few weeks I want to share food that we make from scratch instead of buying them in plastic or in this case, non-recyclable bags.

We don't indulge in crisps that often because they really are not healthy in any way. You can tell yourself they are good for you because they are made from potatoes, but those potatoes are fried and salted and so not really a health food. Plus each individual bag costs around 50p. Sure you can find multi-packs that are cheaper, but they just encourage us to eat more because they are there in the house.  Plus, you've now got at least six non-recyclable bags to throw away--the five that came in the multi-pack and the outer bag that contained them all.

I have taken a vow to give up crisps until the packets become recyclable, so every week i make a batch of stovetop popcorn. Sure you can buy ready popped popcorn these days, but it comes in a non recyclable bag and is often loaded with sugar and salt.

Yes, you can buy an air popper. We've had one. It made all the popcorn taste like polystyrene  packing peanuts unless you drowned it with butter. Again, no thanks.

So, I pop on the stove. It is economical and makes the popcorn taste better than air popped. It is better  and cheaper than single serve crisp packets as one 500g plastic bag of popcorn costs around £1 and makes 25 servings of popcorn.

Even I can do the maths on that.

I wasn't even going to do this as a blog post, but so many people ask me how did I make it. I don't have a fancy popper. I just use my biggest pan. 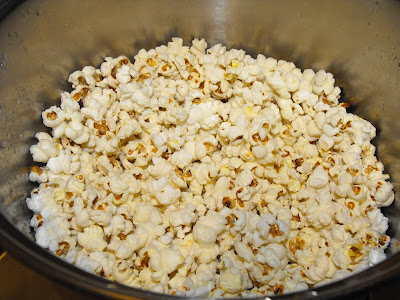 In your largest cooking pot add the following:

1.Use your hands or a spoon to stir the oil and coat the kernels.
2. Put the lid on the pot and turn it up to med-high. This is 5 on the dial of my hob. I have ceramic plate burners which take a few minutes to heat up unlike gas which is more easily controlled.
3. Tidy the kitchen while keeping an eye on the pot. When the lid of your pot fogs over with steam, put your oven mitts on (or grab two tea towels) and hold the handles on either side and give it a good shake. From now on shake every 10 seconds or so. I just count to ten and then shake on ten.
4. Soon, you'll hear it start to pop. Keep shaking otherwise your kernels will burn. Soon it will be popping like mad, just keep counting and shaking. I start counting to five and shaking when the popping gets going.
5. After a few minutes or so, the pops will slow down. When the pops are a few seconds apart, remove from the heat and crack the lid. Some rogue kernels may still pop. The cracked lid will let steam escape but keep late popping kernels in the pan.
6. After a minute, when it has gone silent, take the lid off and stir to move any salt from the bottom onto the top and add a bit more if you'd like.
7. Decant into a large airtight container and let cool. I keep most of it in a large resealable plastic box, and my single serving in a small plastic sandwich box. When completely cool, put the lids on to retain freshness. 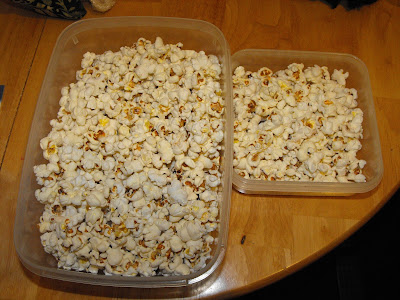 I timed it and the whole thing took me eight minutes. If you have a gas stove, i bet it would be quicker as it heats up faster than ceramic plates.