This week is the penultimate week of looking at Little Red Riding Hood. It's also a bonus week and this post will have two interconnected Red Riding Hood versions to explore. We start with a 2011 film starring Amanda Seyfried. It features many allusions to classic versions of our story such as the underlying sexuality of the tale (Valerie and Peter have many sexy romps in the soft hay or on the white snow, all with her blood red cape spilling around her as they make the "beast with two backs." In earlier tales, red symbolised menstrual blood which was to show that the female protagonist was ripe and ready for marriage, but was warned not to stray from the path of virginity. Clearly, this doesn't apply to Amanda Seyfried's character.

It also features filling the wolf's belly with stones to prevent it from escaping which sometimes appears in the versions of our tale for children as well as the musical Into the Woods where Granny suggests they cut the wolf open and fill him with stones and then laugh as they "watch him try to run away!" 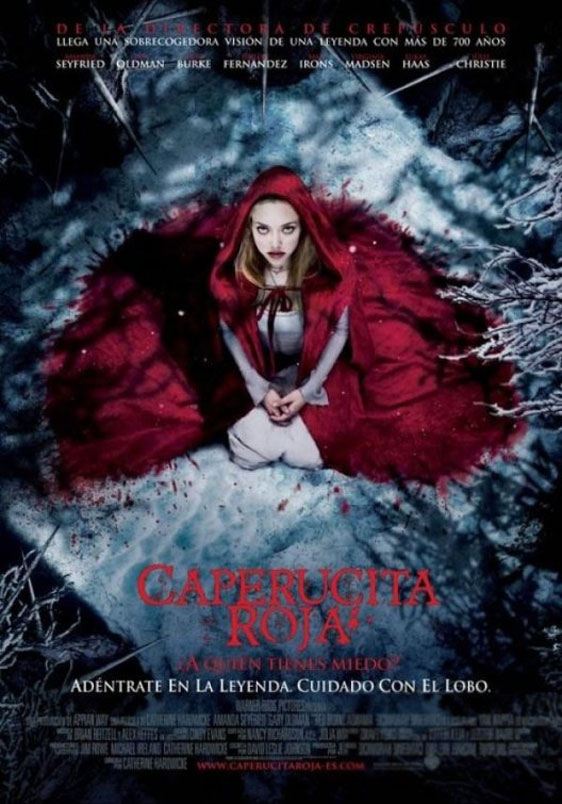 You can watch the trailer here:

Valerie is a young woman who lives in the village of Daggerhorn with her parents and older sister Lucie. They live on the edge of the forest which is plagued by a werewolf which has so far been appeased by livestock offerings.  She is in love with the town woodcutter Peter, but her parents have arranged for her to marry the son of the wealthy blacksmith. Valerie and Peter plan to run away together, only to learn that the Wolf has broken its truce not to prey on the townspeople and has murdered her sister Lucie.

The townspeople send out a search party to kill the wolf consisting of Peter, the blacksmith and his son Henry. Peter separates from them moments before the Wolf attacks and murders the blacksmith. They corner the wolf and slaughter it, but as it doesn’t return to its human form after death then it was just a common grey wolf.

The priest reveals that they've entered the Blood Moon Week, an event that happens every thirteen years, in which whoever is bitten by the Wolf is cursed to become one as well. Father Solomon's men isolate the town and begin to investigate its people in search of the Wolf. That night, the Wolf attacks and, while the townspeople rush to the Church (as the Wolf is unable to step onto holy ground), Valerie and her friend Roxanne venture into the village to search for Roxanne's autistic brother, Claude. They are cornered by the creature and Valerie discovers that she is able to understand the Wolf's sounds. It threatens to kill Roxanne and destroy the village if Valerie doesn't leave with it. The Wolf then escapes, vowing to return to learn Valerie's decision.

Following the wolf attack, the village descends into a witch hunt with Claude captured and accused of witchcraft because he can do a card trick which is considered magic.Clause is locked up in a Brazen bull ( a box made of metal that has a fire burning under it to roast the accused to death.)  In exchange for her brother's release, Roxanne reveals that Valerie is able to communicate with the Wolf but Claude is already dead by the time the Captain opens the box.  Believing Valerie to be a witch, Father Solomon has her captured and displayed at the town's square in order to lure the Wolf out so he can kill it. Henry and Peter join forces and help Valerie to escape.

Henry takes Valerie to the church, but they are attacked by the Wolf, who bites off Father Solomon's hand, which contains silver-coated fingernails. The townspeople shield Valerie from the Wolf, who is once again forced to flee, but not before burning a paw by touching holy land. The now cursed Father Solomon is subsequently killed by the Captain.

Valerie dreams that the Wolf is her grandmother, who lives in a cabin in the nearby woods, so she goes to check on her. After retrieving Father Solomon's hand on the way, Valerie rushes to her grandmother's cabin, but is confronted on the way by Peter. She then notices that he is wearing a glove on his right hand, the same paw that the Wolf burned trying to enter the church, Valerie assumes Peter is the Wolf and stabs him.

Arriving at Grandmother's house, Valerie is horrified to find her dead, and learns that the Wolf is her father. . He reveals that the curse was passed to him by his own father, and he intended to leave the village but wanted to take his children with him. He sent a note to Lucie  to meet him at night so he could ask her to accept her "gift". However, when he confronted her, she couldn't understand him. Realising Lucie was not his daughter, he murdered her in a fit of rage. He then took revenge against the blacksmith, his wife's lover, and now wants Valerie to accept the curse.

Watch the above scene:

Valerie refuses, just as Peter appears and confronts her father, who bites Peter (thus giving him the curse) and tosses him aside. Peter is able to throw an axe into the fathers back, distracting him. Valerie stabs her father to death with Father Solomon's hand. Valerie and Peter fill the father's body with rocks so he can never be found and dumps the body in the lake. Peter departs in order to learn how to control his curse, vowing to return only when he's able to ensure Valerie's safety. Valerie narrates that Henry found his courage and joins the ranks of the Captain's monster hunters. Valerie's mother finally accepts that her husband will never come home, and the village continues to live in fear even though the wolf never returned. Valerie then moves to her grandmother's house, leaving her old life behind as she can't go back to the village because she is married to the wolf (Peter) and wants to keep that a secret.

Watch the scene above:

The last scene shows Valerie outside the cabin on a full moon. She hears a slight growl, turns around and sees Peter in wolf form as she begins to smile. In an alternate ending, Valerie is seen holding a baby, which is her baby with Peter.

This film captures much of the sensuality of the earlier tales, but also with the warnings that come with sexuality.

As a bonus, I would like to share Amanda Seyfried playing the guitar and singing the song  Li'l Red Riding Hood that we explored earlier. There are many versions of this song, but by far the best that captures the complete animal nature and sexiness of the song is the one by Sam the Sham and the Pharaohs which you can listen to HERE. Of all the other versions, this comes the closest.

This was released on YouTube as a tie-in to the film. Enjoy.

That's it for this week. Stay tuned next week for our last version of Little Red Riding Hood.
Posted by Heather Tisdale at 05:21