Last week we looked at a version of this tale from the award winning musical Into the Woods, but this week i want to look at the song in popular culture. 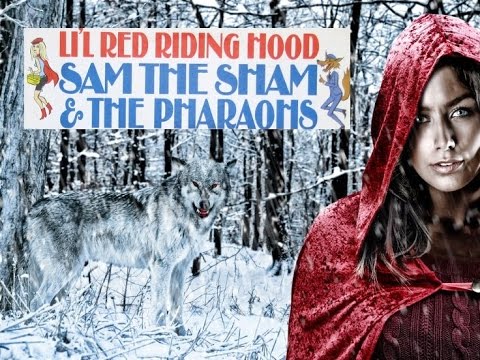 In 1996, Sam the Sham and the Pharaohs (best known perhaps for their song Woolly Bully) had a hit with Li'l Red Riding Hood. It went to number two on the both the US and Canadian charts.

It is based on the version by Charles Perrault, blurring the line between the wolf as carnivore and the wolf as male sexual predator. In a reversal to the traditional tale, the wolf remarks on "what big eyes" and "what full lips" Red has. He declares "what a big heart he has" to her, but as an aside to the audience freely admits he is disguised in a "sheep suit" to lull her into a dropping her guard. The song begins with a howl and ends with him Baaaing like a sheep to conceal his true nature.

There is something deeply sensual about Sam the Sham's voice that makes this song sound raunchy and arousing, like you could do a strip tease to it. There have been many cover versions, but for me none capture that animalistic tone better than this one. If you are interested WIKIPEDIA has a list of other artists that have covered the song and many are available to listen on Youtube. There are punk covers (Bowling for Soup) and an a capella Doo-Wop cover (The Bobs), but for my money, this version beats them all (even the Rolling Stone's version.) There is only one version that comes close and we will look at it in a few weeks as it is tied to a film.

Listen to the Sam the Sham version here:

Stay tuned next week for a musical  version that also includes the Three Little Pigs.
Posted by Heather Tisdale at 02:16