Hello lovelies! This was a sort of spur of the moment dish we have eaten twice recently. We are lucky enough to have green-fingered friends who gladly give us produce from their garden. Twice last week they gave us some small home grown fresh tomatoes. These were beautiful--a deep red (unlike the anaemic ones you see at the supermarket)  and really juicy. They were all about the size of a small egg. I was trying to decide what to do with them when I dreamed a food dream and woke up knowing exactly what must be done.

They needed to be roasted under the grill in olive oil and balsamic vinegar.

I tend to have a rule NO OVEN UNTIL AUTUMN but I was willing to use the grill as it heats up the kitchen (and consequently me) less.

This was a super quick meal with pasta. I decided that it would go well with sauteed kale and a creamy sauce. I thought my GARLIC ALFREDO SAUCE would be great, but I was looking for a way to make it even cheaper than using cashews and get more protein and fibre into it.

Enter the humble white bean. The first time I used cannelloni beans, but the second time I used butter beans. Both worked equally well as they were a soft, mild white bean.

The result was a thick garlicky sauce (and it was saucy--just the way we like it. Ooo-er, Missus. If you want less sauce than add more pasta) topped with juicy bites of flavourful tomatoes. 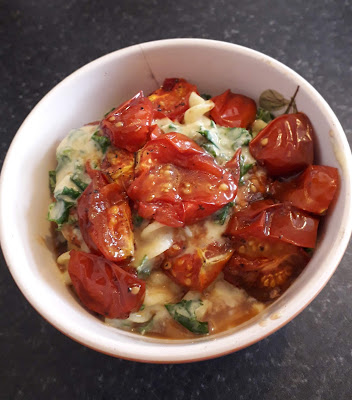 Roasted Tomatoes with Kale and White Bean Alfredo Sauce Pasta
Move your oven rack to the highest place and turn on your grill or broiler. I set my temperature at 220 degrees C/425F.

Ingredients:
100g curly kale (about 4-5 cups)
Before you do anything, prepare your kale by de-stemming it and tearing into bite sized pieces.

tomatoes (we used 9-10 egg sized ones, but could equally use less bigger ones or more smaller ones)
Slice in halves or quarters and drizzle with
1 TB olive oil
2 tsp balsamic vinegar
generous salt and pepper
Arrange cut side up in a roasting pan.

To get started:
1. While the grill/broiler heats, put the onions in a large pot  with the veggie stock and garlic and cook on med high. Cook until liquid is nearly absorbed, remove from heat and let cool for a minute or so.
2. Add to the blender with the rest of the sauce ingredients and blend until velvety smooth. The onion really thickens it up and add flavour.
3. While the onion and garlic are cooking bring your water to the boil for the pasta.
4. When the pasta water boils, add the pasta and cook according to package directions. When you put the pasta in the boiling water, put your tomatoes under the grill and set timer for 15 minutes. While they cook the tomatoes will collapse, release their juices and intensify in flavour.
5. In the same large pot you cooked the onion, cook the kale with a splash or two of boiling pasta water until cooked down and softened. When tomatoes are nearly done, add the sauce and cook until bubbling. Add the drained pasta and stir to mix with the kale. Top with roasted tomatoes.

This was so lush that I think it will be my Alfredo recipe from now on. And a tin of white beans are cheaper than cashews, so this is a win-win situation.
Posted by Heather Tisdale at 23:54