What We Ate Wednesday--Curried Kale with Sweetcorn, Chickpeas, Toasted Coconut and Peanuts

Hello lovelies! This meal is one of our favourites. It tastes *amazing* with just a bit of prep work (the toasting of the coconut) and I couldn't believe I had never blogged about it before. As we were eating we had this discussion:

Even this picture does not do it justice. You can't taste the sweet toasty coconut or the plump juicy raisins or or the salty crunchy peanuts or the spiced flavourful kale, sweetcorn and chickpeas. It is a veritable party in your mouth.  The hardest part is toasting the coconut and that's not really hard just boring.

Me: (Shakes the pan) Hurry up. It's been ages. (Stirs the coconut) Come on...hurry up and toast. (shakes pan again) OH FOR FRITH'S SAKE WILL YOU....oh wait! Nevermind. it's toasted.

This gets its punch of flavour from Patak's Balti Curry Paste. Even though I know that curry powder is cheaper than curry paste, I think paste has such a depth a flavour. You can make a fabulous curry by throwing all your vegetables that are left at the end of the week in a pot with some coconut milk or a tin of tomatoes and a tin of beans or some red lentils and a spoon or two of curry paste and have something really fancy tasting.  And it lasts about 6 weeks in your fridge after opening. 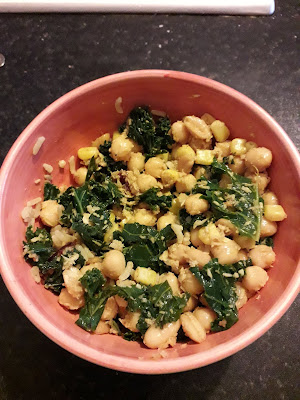 Toasted Coconut:
5 TB unsweetened desiccated coconut
Toast in a dry frying pan over medium heat stirring and shaking the pan frequently until the coconut browns. Incidentally, toasted coconut tastes smashing on top of a vanilla cake. It will seem like ages with nothing happening but do not leave it unattended as it goes from white to brown in a matter of moments once it finally gets hot enough. When brown, set aside.


The sauce:
the leftover veg stock (I will tell you about that in the directions)
a knob of vegan butter
1 TB Balti curry paste
1 TB lemon juice
1/4 cup raisins or dried cranberries


The rest:
1.5 cups of  frozen corn, defrosted with boiling water and drained
1 tin chickpeas, drained and rinsed
half a cup salted roasted peanuts

1. Toast your coconut first as described above.
2. In a large pot, boil your kale in the vegetable stock for 3 minutes, then drain the kale and SAVE THE STOCK. Press the kale in the colander to get the all the stock out.
3. In the same big pot add your saved stock and everything you needed for the sauce. Boil for about 2 minutes until the sauce thickens and reduces. The dried fruit will also plump up here.
4. Add in the corn, chickpeas, peanuts, kale and coconut and stir to mix together.
5. Serve over rice. You can't see rice in the photo, but trust me--it is under there.

I am telling you, the picture does not do this justice. It hits all the tastes--sweet, salty, sour and bitter and even umami.

Posted by Heather Tisdale at 00:02