What We Ate Wednesday--Pea and Mint Hummus

Hello lovelies! I am so easily suggestible when it comes to food. Mention something that sounds good and I will be OBSESSED with it until I can make it myself. FACT.

Last week my friend Bexy casually mentioned that she had eaten Pea and Mint Hummus and I was like Get in my belly!  I quizzed her about how it was made and she said it was a storebought one from Aldi. She said it was Lemony, refreshing and VERY green.

That settled it. I was making me some of that spreadable deliciousness.

Now, Bexy is a gardener. When I said I didn't have any fresh mint she offered to bring me some in a pot. Then I laughed my head off and said I have yet to be able to keep a mint plant alive which she agreed was very impressive.

It is nigh on impossible to kill mint.

But I have done it.

I am a mint murderer.

So I decided to use mint sauce. But if you are not a mint murder, then by all means use fresh mint.

I also decided to use white beans (in my case butter beans as they are cheaper than haricot or cannellini) instead of chickpeas as i find they make a creamier hummus without as much oil.

I also decided to use a fresh lemon rather than bottled lemon. Sometimes I interchange them, but I wanted the zest and a pop of extra lemony flavour. 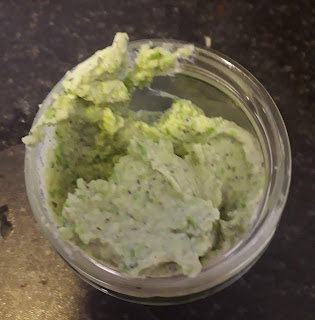 In a food processor blend the following until smooth:

Blend everything really well, stopping to scrape down the sides occasionally. Add the bean liquid a few TB at a time until it is desired consistency. I used 4 TB to get it how I like it.

Spoon into containers. I love salsa jars. They are the perfect size. This makes 2 and a half salsa jars so just about 2.5 cups of hummus.

Did you know you can freeze hummus? You can. Just defrost overnight in the fridge.

I freeze two and put the half filled jar in the fridge.

Making your own hummus is way more economical as you can make a huge batch for pennies compare to those teeny plastic  tubs you get at the supermarket.

I make a lot of different flavoured hummus for my lunch, so will hopefully start to document them and share recipes instead of just stuffing them into my mouth.

Posted by Heather Tisdale at 02:57