What We Ate Wednesday--Black Bean Tarkari with Peaches

Hello lovelies! I am not a recipe purist. I will happily substitute ingredients for vegan ones (chickpeas not chicken) or substitute for a cheaper alternative (mushrooms not tofu.)

This is why i love the chef and cookbook author Jack Monroe.  Jack spent a few years with a small child living in poverty conditions with £10 a week to spend on food and discovered she could make food from scratch for cheaper and keep them healthy. She has several cookbooks--two which are aimed at cheap and healthy cooking and a blog COOKING ON A BOOTSTRAP which is full of good recipes and tips for frugal eating. Jack has been vegan for about a year and while her cookbooks are not 100% vegan, they are about 80% with vegan options for everything as we all know plant based eating is cheaper than meat if you eat beans and lentils instead of fake meats that are processed and expensive.

We were one of the backers for her Kickstarter campaign and so we received an autographed copy of her cookbook Cooking on a Bootstrap. Jack, like me, is not afraid to substitute,

This recipe for Black Bean Tarkari with Peaches was adapted by her from a dish from a Nepalese takeaway. She substituted black beans for chicken and a tin of cheap peaches in light syrup for fresh mango.

This is my kind of cooking. The peaches I bought were the cheap Tesco brand ones. They were a bit soft and falling apart but that's ok--that's what you want.

Also, the recipe called for an onion and I had none. So I just left it out. If I had had a pepper I would have added that, but I didn't. I was seriously out of everything except a tin of beans and a tin of peaches.

I added a tsp of amchoor (dried mango powder) but only because I  had some. A friend gave us a tiny pot and I was eager to try it. You don't need this as I have made it before without it and it was still splendid. 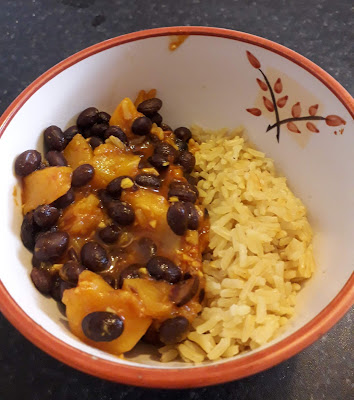 I served mine over brown rice, so I started rice first.

1. Cook your onion and garlic in a splash of oil or water with the pinch of salt on low heat so it doesn't burn.
2. After a few minutes add your spices and stir to coat the onions.
3. Add the drained peaches (breaking them up a bit with a spoon), the tomato puree and and 1/4 cup water. Then add a TB  of the syrup. Bring to the boil.
4. Turn down the heat and pop a lid on the pan and simmer for 20 minutes until the rice is nearly done then add the black beans. The peaches will have broken down by now. Taste and see if it needs a TB more syrup. Simmer until the rice is ready.

This was easy and cheap and a nice combination of sweet and savoury.

Posted by Heather Tisdale at 04:11