What We Ate Wednesday--Bounty Bites

Hello lovelies! This dessert came about as so many things do for me--in a dream.


Sometimes you feel like a nut,
sometimes you don't.
Almond Joy's got nuts.
Mounds don't.

I was dreaming about Mounds and how they compare to the British equivalent the Bounty Bar.

So these are like a sticky coconut with a layer of caramel then covered in chocolate which made it taste quite a lot like German chocolate cake. Mmmmmmm..... 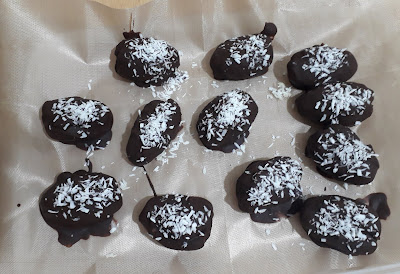 1 Make the sticky coconut filling. In a food processor combine 1/3 cup plus 1 TB shredded coconut with the liquid sweetener and coconut oil and whizz to combine.

2. In a double boiler (basically a glass bowl sat atop a pan with an inch or two of simmering water) or the microwave carefully melt the chocolate. If microwaving, check every 30 seconds and stir to prevent scorching. When melted remove from heat.

3. Meanwhile while chocolate is melting carefully pit the dates but try not to cut them in two, just slit them and pop the pit out.It should be like having a hinge on the back side, if that makes sense. If you accidentally cut through don't worry about.

4. Fill each date with about a heaping half teaspoon sticky coconut filling and then close it up with most of the filling inside the date. If you accidentally cut a date in half, then just put the other half back on top of the coconut like a hat.

5. With a spoon drop each date into the melted chocolate and roll it around to coat it on all sides.  Then carefully put it on the parchment paper and sprinkle with a little of the remaining  dried not sticky coconut while the chocolate is still warm so it will stick. I tend to do three chocolate covered dates, then coconut sprinkle, three more dates, then coconut sprinkle. You get the idea.

6. When all are done, pop in the fridge to harden up. When the chocolate is hardened then peel them up from the parchment and store in an airtight container in the fridge.

There may be a little sticky coconut left. Just put in the bowl with the remainder of the melted chocolate and  roll into balls for some bonus treats.

Or just eat it with a spoon directly from the bowl, cos that's what I did.

Posted by Heather Tisdale at 01:37