What We Ate Wednesday--Macaroni Cheese like the Blue Box Stuff


Hello lovelies! If you read this blog regularly, you know I get obsessions. Food obsessions. I see something and cannot stop thinking about it until I have made a vegan version at home and then I eat it until I am sick of it. Then after a while the memory surfaces and I decide to eat it again. And again.
And quite possibly again.

My BFF and I were recently at the Allergy and Free from Show at Kensington Olympia. It was massive with hundreds upon hundreds of stalls. We ate ourselves silly trying samples of everything on offer but there was one thing we ate that stuck with me. There was this macaroni cheese made from a powder that you just added water or milk to that tasted just like the kind in the Blue Box. Just. Like. It.

Now, I wanted to buy some, but it was £4 for a one box serving and while it was amazing, I had spent my cash on other things and was out of money. But it got me thinking that I could make a powder mix at home and then just have easy mac and cheese whenever the mood took me. Theirs was nut free but their ingredient to make it creamy was powdered coconut milk. I was sure I could make something similar.

The whole way home on the Megabus (6 hours—I told you I was obsessed!) I searched the internet for recipes for a vegan powder mix. I settled on THIS ONE because it was developed by Miyoko Schinner who developed all those aged artisan vegan cheeses so I thought it would be the best one. It does contain nuts so if you need a nut free one go here for a similar but allergy friendly version. NUT FREE VERSION.

We had it last night and it did not disappoint. I was out of unsweetened non-dairy milk, so I made it with water and a few blobs of melted coconut cream. I think it would be even richer and creamier next time. And there will be a next time. The powdered mix made it super easy to have macaroni cheese in minutes.

Because mac and cheese by itself is not a meal I served it with some mushrooms and broccoli cooked with a splash of tamari.

And for once I followed the recipe exactly as it was written. Can you believe it? You can find the original recipe HERE. Also, you will need to source tapioca flour (sometimes called tapioca starch) as it gives it a stretchy quality. I think it would benefit from a little sharpness, so next time I might add a tablespoon of lemon juice at the end or add a bit of lemon pepper (if I can find it) like the nut free version above used. 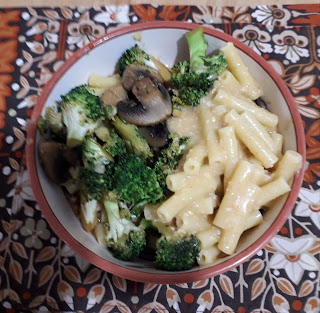 Instructions
Add the oats to a food processor and process until a powder is formed. Then add the cashews and pulse until they are coarse crumbs. Then add everything else and process until there are no discernible chunks or large granules of cashews--just a fine powder. 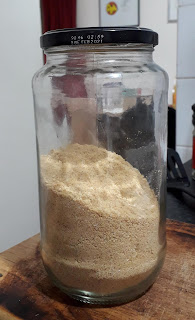 How to use this mix
Cook 1 cup of dry (GF) macaroni according to package instructions and drain. Combine 1⁄3 cup mix with 1 cup water or unsweetened nondairy milk in a saucepan over medium-low heat. Add in optional 1 TB lemon juice.  Whisk well and bring to a boil. Simmer for 1 minute, then toss with hot cooked macaroni.

We doubled this recipe so we could each have a bowl of cheesy, noodle goodness because we are greedy vegans. I had forgotten how I love macaroni pasta as the sauce goes into the tubes and you can suck it out and make a little whistling noise to annoy your husband. ha ha.

This would be a great meal to take on a holiday where you had access to a kitchen as you could just buy some dry pasta and portion out the right amount of powder on a container and bring it in your suitcase.

Posted by Heather Tisdale at 09:03