I wrote a while back about our groovy Hans Christian Andersen poster that was all shimmery and luminescent. Spiderman, being the best reference librarian in the world (even better than the orang-utan librarian from Disc World), tracked down the poster on line and found out all about the illustrators and the process of making it all shiny. Fascinating stuff.

The painting was originally called Hans Andersen’s Dreams and created by a set of twins named Anne and Janet  Grahame Johnstone. They worked together on every piece of art passing it back and forth between themselves until the end product was a true collaboration between them and one sister‘s work inseparable from the others. . When Janet died, Anne carried on, but had to learn how to draw animals--particularly horses--that had been her sister’s speciality. They led fascinating lives and if you want to read more go here: http://en.wikipedia.org/wiki/Janet_and_Anne_Grahame_Johnstone
The illustration was used on the cover of the Complete Works of Hans Christian Andersen --our copy in fact. Maybe that is why the print seemed so much like an old friend when we saw it. As soon as we got home from the wedding Spiderman rushed and got our copies of books that contained HCA stories. He went into the back room to put something away and I said, “Um, have you looked at the cover of the book you just gave me?” We were both stunned that there was the print. But it was all flat and 2D and some of the upper images had been excluded to make way for the title. The shiny silvery one we bought was much nicer. But what was it made from?
Spiderman to the rescue again. The process is called dufex and it was developed by FJ Warren in the early 20th century. It involves printing images onto aluminium foil-lined paper or cardboard, using UV formulated transparent ink which allow the reflective shine to be retained. Engraving techniques are then used to add a range of light reflective textures to the foil.  Now you want to know the *really* weird coincidence? The original dufex factory was here in Hitchin. So the painting has truly come home.
I can see you are dying to see the painting. So here it is. It is not our best photo as the luminosity is really hard to capture. But you’ll get the idea. Click on it to enlarge it. How many stories can you name? Before we got home from the wedding we correctly identified 16 stories at a glance, but after many hours of research we have identified 44. 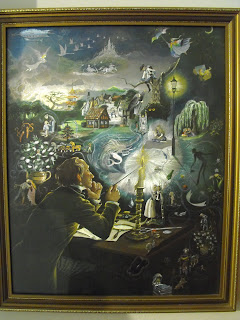 Here it is in close up. Sorry for the quality. That might be easier for identification purposes.  This is the top—click to enlarge. 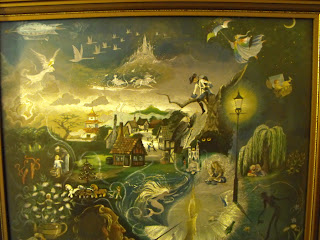 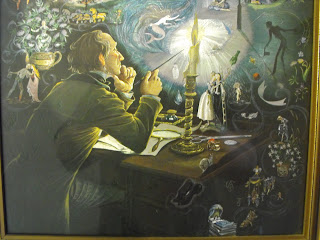 If you only know the Disney versions of stories like The Little Mermaid then it is well worth taking a look. HCA was a pious man who struggled with his sexuality (and excessive masturbation that he recorded faithfully in his journal with a + sign) and many of his stories are moralistic tales with sins like pride or vanity being punished in the most startling ways. Check out The Girl Who Trod on a Loaf and The Red Shoes if you don’t believe me. Most of his stories were wholly original, but a few were based on older variations or there is a Brothers Grimm story that is similar.  But my favourite has to be The Tinder Box with the 3 dogs with the giant eyes--eyes as big as saucers, eyes as big as mill wheels and eyes as big as the round .  He also does many delightful anthropomorphic tales where an inanimate object like a shirt collar (who is a big flirt and tells the scissors she must be a dancer with such great legs) or a darning needle (who fancies herself an embroidery needle and when the eye snaps off she tells everyone she’s a brooch) tell their stories (and again are often punished for their lying and thinking better of themselves than they should)
Here are the 44 we have identified so far:
* means it was one of our original 16 identified
**means there is another version similar elsewhere
In a Thousand Years
*  **The Wild Swans (similar Grimms)
Ol’ Shut Eye
The Angel
*The Snow Queen
*The Flying Trunk
*The Nightingale
The Storks
*The Red Shoes
Little Tuk
*The Fir Tree
*The Steadfast Tin Soldier
*The Tinder Box
*The Little Match Girl
The Old Street Lamp
Under the Tree
The Flax
The Elder Tree Mother
*Great Claus and Little Claus
* The Little Mermaid
*Thumbelina
The Darning Needle
The Shadow
Little Ida’s Flowers
*The Swineherd
The Pen and Ink Stand
The Snowman
The Drop of Water
The Candles
The Shepherdess and the Chimney Sweep
The Naughty Boy
The Bottle Neck
The Lovers
The Shirt Collar
*The Ugly Duckling
*The Girl Who Trod on a Loaf
The Silver Shilling
Brownie and the Dame
The Snail
The Galoshes of Fortune
** The Rose Elf ( version of Isabella and the Pot of Basil)
*The Emperor’s New Clothes
The Bronze Boar
*The Princess and the Pea  (which actually is the Princess ON the Pea in the original translation)
How many can you identify now?

Posted by Heather Tisdale at 02:39