Doctor Who (what an) Experience

We were gifted at Christmas with tickets to see the Doctor Who Experience in London from Spiderman's sister and her husband and let me tell you--we had the time of our lives. Thanks Leila and Gary! I had a small worry we'd be the only people there with no children, but clearly there were lots of geeks like us just having a good ole nerdy time.

We had seen some of the Dr Who exhibits of costumes and props from the shows in both Cardiff and our own home town museum that managed to score an exhibition a few years back. But this was the exhibits (expanded to include up to date costumes and props--the tree people from the Christmas episode but also past retrospectives of how the console of the TARDIS has changed over time and costumes of all 11 doctors.) But then there was the EXPERIENCE! A hands on, interactive, scary roller coaster ride of fun!!!

It began with a film using clips from the show and the crack in time that appeared on Amy's wall and then the screen magically spilt in the shape of the crack and we entered through the time crack to find that the Doctor had been captured and imprisoned on a second version of the Pandorica and had tried to use his sonic screwdriver to tranmit a message to Amy and Rory for help, but it malfunctioned and instead captured a bunch of "shoppers" meaning us. 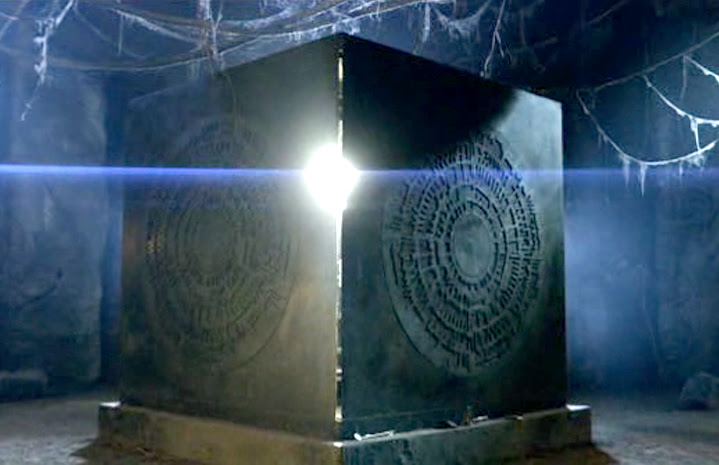 We were the ones who had to save him. he tried several times to signal for the TARDIS and then like magic it appeared (from behind a scrim--having been hidden due to clever theatrical lighting--knowing this didn't ruin the enjoyment though!) and then all 30 of us had to pile into the TARDIS which was so cleverly constructed it really did look like we wouldn't fit--but those of us who know, understand the TARDIS looks like this on the outside: 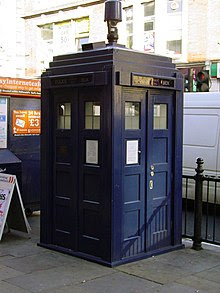 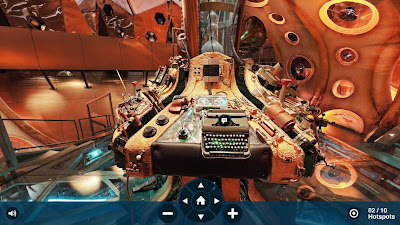 We all crammed in and the kids got to use the controls guided by the Doctor to fly the TARDIS (and the floor moved about and there was smoke and sound effects!) but she crashed and then we had to quickly run out down a scary corridor like the ones they were trapped in on the planet of the Weeping Angels. We ended up on Dalek ship and were attacked by those new power ranger looking Daleks who scanned our human DNA and found us unacceptable--particularly when it was discovered we were friends of the Doctor and they tried to exterminate us with lasers but then another dalek ship came and fought with them over racial (species-al?) purity and we were able to run and make our escape. 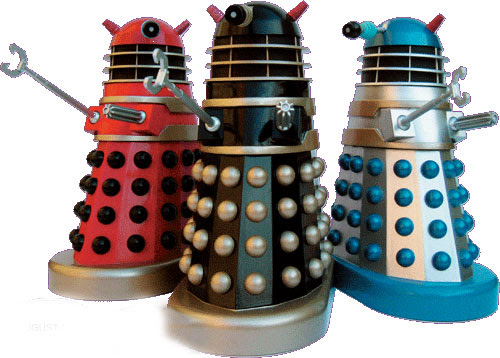 Then we were given some radiation shield goggles which turned out to be 3D glasses--which have come a long way from the crap red and blue ones of my youth. We saw the pandorica open and the Doctor escape but then he had to fight in space all his mortal enemies in 3D!!!!!!!
Daleks (see above), Cybermen and Weeping Angels all flew at us in 3D making me duck and dive and have to hold on to Spiderman's arm! the Cybermen were shooting lasers at us: 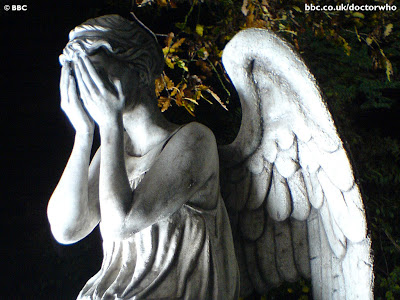 It was brown trouser time but the Doctor saved the day and we were safe once again. I had such a wonderful time and I said to Spiderman, "When I was a child I would have really believed this was happening!" To which he kindly replied, "When you were a child?" Which is true. I was totally into it--as much as an kid (and perhaps more than the jaded munchkin I overheard talking to his very excited dad) and I really felt like I was part of the action--like I was there making it happen.

Maybe I really was.

The experience was the best bit, hands down, but the exhibits were great as well. My second favourite thing was overhearing a conversation of a small lisping child to his parents, "Look! Thyberman headth through hithtory!"

What an awesome, unforgetable experience.
Posted by Heather Tisdale at 06:30

Email ThisBlogThis!Share to TwitterShare to FacebookShare to Pinterest
Labels: entertainment