The only dog that doesn’t make me sneeze

Everybody loves K-9 the robot dog from Doctor Who don’t  they? How could you not? 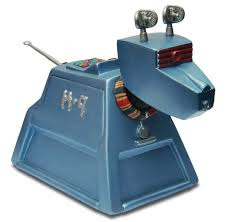 A  few months ago when I made my decapitated head of the Jabberwock for school, Spiderman asked me a question. He held the head (and went galumphing back--sorry wrong story) and said, “If you changed the shape a bit, this could be the head of K-9. I wonder if you could make one?” I know a challenge when I hear one and so I agreed to give it a go. He made me promise if it didn’t go well and my perfectionist self felt the least bit stressed  I would  abandon the project. For this reason, I really took my time and did not rush. My crafting theory is often once I get a cracking idea in my head I want to stay up all night getting it done all in one go. This project needed to be different.

I started with proper research not just a dream I had (which, to be fair, is the basis for most of best ideas.) You can actually find plans on our old pal google for building a model for K-9. This gave me a few patterns for size and shape. I also found where people had attempted to do what I was doing--sew a model not build it out of metal. I looked at where they had made shortcuts--particularly in the recessed bits on his sides. Many just used a dark panel to suggest a recessed bit rather than attempt to sew a sunken panel which I quickly decided to magpie and use that idea on my K-9.

I did do a fair bit of dreaming as well. I made sketches and wrote ideas for how I would make certain parts. I started to collect bits and bobs  like buttons for his eye stalk and some plaid elastic for his collar. I started saving every bit of cardboard I could find as I knew he would need it inside for stability. I bartered an old radio antennae by doing a bit of sewing for a friend. I found some cool heavy duty metallic silver fabric at the market and I knew I was ready.

So here, after months of planning, is the result. Our very own dog. I am chuffed to bits with the results and cannot stop giggling every time I see him. I like to say (in my best fluffy bunny voice)
Me: Wook at you, you are such a good wittle doggie!
K-9: (in my best John Leeson imitation) Affirmative!

Here he is in glorious Technicolor, from every conceivable angle. I have him on the bed  in some shots because he’s only about 23 inches tall from ears to bottom and I wanted to get a good view. Enjoy!

What do you think? He’s not super durable (no rough-housing , thank you) in the sense that he is held together with copious amounts of thread and hot glue as well as cuckoo spit and dream clouds. Okay, maybe not that last bit, but as I say about the spiders, he is “a looking at pet rather than a playing with pet.” He’ll be perfect for what we want him to do which is sit beside the sofa and make us smile.

Posted by Heather Tisdale at 00:36