The Only Good Dalek

Spiderman has a book in his library called The Only Good Dalek. In my heart I know the rest of that phrase is supposed to be The Only Good Dalek (is a dead Dalek) but it immediately conjured up an image of a really nice Dalek who had trouble fitting in with his peers. It made us both laugh and we decided that the Derek was perfect for a Dalek and so the tale of Derek the Friendly Dalek was born.

The Only Good Dalek
﻿Once, a long time ago on the planet Skaro, there lived a little Dalek named Derek. Derek was a friendly little Dalek, but being friendly was not high on the list of what it means to be a good Dalek and so he was often alone. He had learned that the feelings he had or the thoughts and dreams he possessed were wrong, so he mostly kept his mouth shut and tried to blend in. It was hard because he was lonely, but to even admit being lonely was a serious crime to the Daleks because it smelled of having feelings and Daleks weren’t supposed to have feelings. It was bred out of them by Davros to make them the ultimate killing machine. On top of that, Derek also suffered from feeling ugly. He hated the dull grey Dalekanium metal they were forced to wear. He longed for a splash of colour! Once he found some red paint in his shed and painted his body armour a lovely shade of cherry, but that only drew scorn from all the other Daleks. After that, they wouldn’t let him join in any of the Dalek games (which basically consisted of exterminating things.)

School was the absolute worst. Every day the Dalek teacher would place an object on his desk and ask the little Daleks what they should do with it. This was their cue to shout “Exterminate!” and blast it with their laser. Once, it was a puppy and whilst the others were busy exterminating it, Derek was thinking, “If only I could take it home and give it a cuddle! I’d call him Spot!” Another time it was Dalek Khan who was ancient and half mad. The others thought he was useless because he could no longer fight in battle and ought to be exterminated, but Derek thought, “I think we should listen to our elders, they are so wise and have such stories to tell!”


Soon it was exam time. Each Dalek would have to approach the table and an object would be placed before him. He was to identify it and exterminate it. The thought of this made Derek feel rather ill and he told his Mummy that he had a tummy ache and needed to stay home from school, but she was a good Dalek and didn’t believe in tummy aches (she only believed in exterminating) so she sent him anyway.

When it was his turn, he slowly wheeled himself up to the table. The teacher put a vase filled with roses on the table and waited for the correct answer. “Say it! Just exterminate it!” he thought to himself, but that was not what he really wanted to do.


“Well…go on boy!” the teacher whined in his metallic voice.


“And then?”  He could hear that H the teacher was growing impatient. Derek looked through his eyestalk at the lovely red roses. They were just the same colour as his body armour. He extended his plunger and took a deep breath and smelled their sweet perfume.


“I’d like to bash the rose petals and then….soak them in water and make rose water perfume for my Mummy!” he cried.


There was a collective GASP in the room and then suddenly, every Dalek turned on him and shouted, “EXTERMINATE!” and shot him with their lasers. Within seconds, Derek had been reduced to a pile of dust and all the other Daleks were awarded top marks in their exam and went on to invade other galaxies and lived happily ever after. 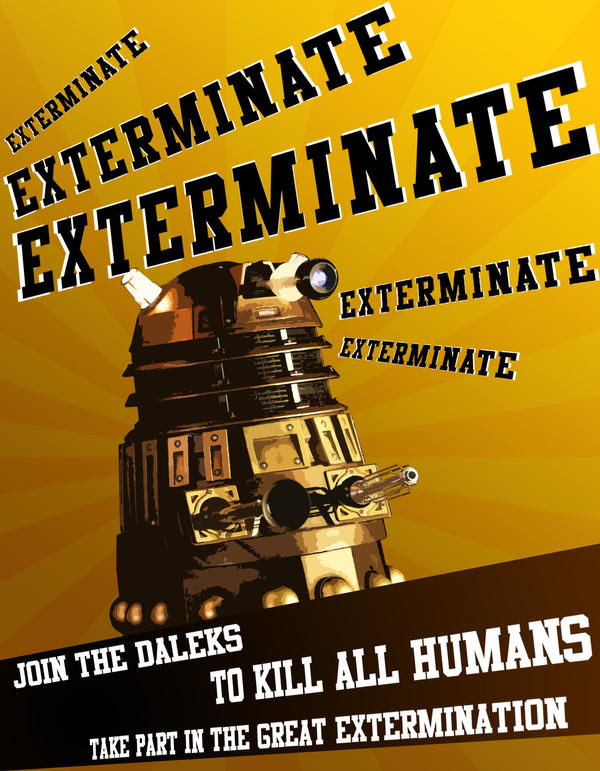 
We also thought you could sing a wee song about him to the tune of “Rudolph the red nosed reindeer.” But we haven’t made it up yet. Maybe next time.

Posted by Heather Tisdale at 06:19