We recently acquired a print drawn by one of favourite comic book artists Roman Dirge (no, really that‘s his name) and were lucky enough to have it signed by Roman himself. If you think I am a tattooed circus freak, I ain’t got nuttin’ on Roman.


He does this weirdly funny, rather subversive comic book of Lenore the Cute Little Dead Girl.


The print features one of our other favourite authors Neil Gaiman (whom we’ve seen twice recently to talk about his new book The Ocean at the End of the Lane) who has written another favourite graphic novel The Sandman series as well as Neverwhere about “London below” mentioned in the post about Peter Capaldi as Doctor Who.


Basically our hero in black (because good guys can wear all black and that’s all Neil ever wears) gives a bouquet of flowers to Lenore the little dead girl. She is delighted until a bee comes out and stings her on the nose and in true Lenore fashion, the last panel reveals the gravestone of poor Neil. Like Mr Gosh her undeterred suitor whom she ran over with a lawn mower bunches of times after she set him on fire and buried him alive…maybe he’ll come back to try once again to win her affections.

But we loved the joining up of the two favourite characters (and Neil you are a character) so we brought it along to one of the book signings where we recently were hanging out with Neil and got it signed as well. So now it sports the signatures or both Roman Dirge and Neil Gaiman! Just to let you know--they are actually friends and collaborating on something which was the impetus for the drawing--lest you think that Roman has a death wish on Neil. Which would be quite funny because Neil’s character of Death from the Sandman is our favourite.


But how do we display such a masterpiece? We thought long and hard and finally decided to spray paint a plain wooden frame with that stone effect spray to make it look like a grave stone and I would make two little skulls out of polymer clay like the barrettes Lenore has worn since issue 3 of Noogies (the other two volumes are called Wedgies and Cooties respectively.)

So here’s the frame. Click on the photo to make it bigger and really see the detail on this absurdly funny cartoon. You probably can’t see it, sadly, but the bee is smiling as it stings her.  Also you can't see the skulls too well as there was a bit of a camera glare issue, but rest assured they are cool. 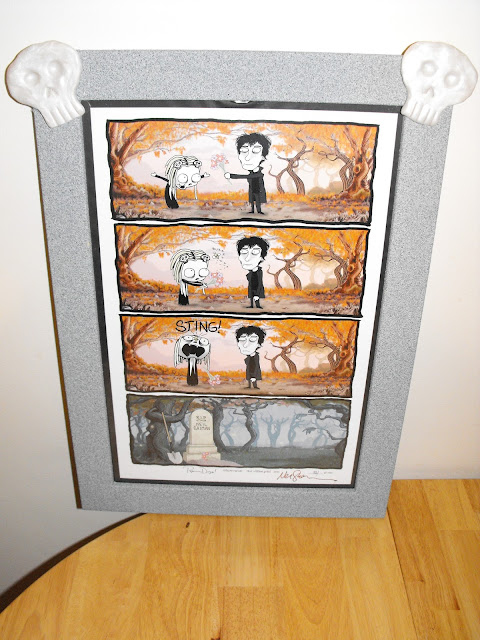 Here is a close up of the signatures--you can see Neil’s grave quietly clearly. We like that Neil’s fountain pen did a bit of blob at the end like a spatter of blood. We are so easily amused.

Now Spiderman just needs to hang it so I am putting on my patient face to  hurry up and wait.

Posted by Heather Tisdale at 03:18