How to make a bottle of Liquid of Petrifaction

When everyone else was admiring the just finished powder of life, Ojo snuck in a few extra brains into the inanimate body of the Patchwork Girl. Then Margolotte went and added a few more, but Ojo was afraid to say anything for fear of getting into trouble.

Then when Dr Pipt was bringing Scraps the Patchwork. Girl to life, it went horribly wrong.

But suddenly the Patchwork Girl threw up one arm, which knocked the bottle of powder from the crooked man’s hand and sent it flying across the room. Unc Nunkie and Margolotte were so startled that they both leaped backwards and bumped together, and Unc’s head joggled the shelf above them and upset the Liquid of Petrifaction……They stood motionless and stiff as marble statues, in exactly the positions they were in when the Liquid struck them. 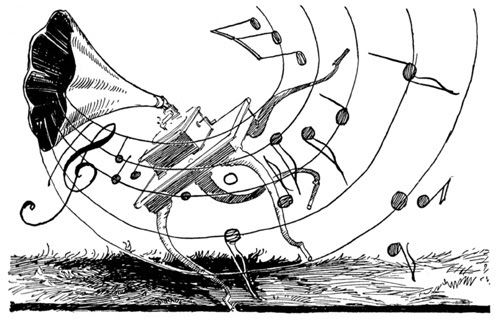 Well, Unc Nunkie and Dame Margolotte were turned into marble statues by the Liquid of Petrifaction and the rest of the powder of life sadly spilled on the Phonograph who from then onwards followed everyone round playing  records and dancing a jog. Most annoying.

The rest of the story is that seemingly impossible quest (stay tuned for more about that later) that Ojo the Unlucky must go on to find all the ingredients needed for the antidote to save Unc Nunkie from being a statue forever.


I decided to make a bottle of Liquid of Petrifaction.  I had a bottle that used to contain rose water that was just right for this craft, plus my standard technique of torn parchment paper and a sharpie.

However….upon looking back at my book I was astounded to see that the word was not petrification but petrifaction.  My mum *always* read it to me as petrification and I, myself, *always* saw it as petrification and only because I stopped to check the spelling did I notice. I looked it up and they both mean the same thing so decided to go with being inauthentic (I know, I know…Oz purists don’t kill me) because that is the word that was in my heart.

I added a few illustrations of marble statues (one male, one female) and a warning which reads Caution: do not spill. 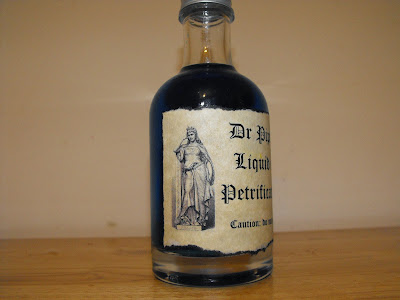 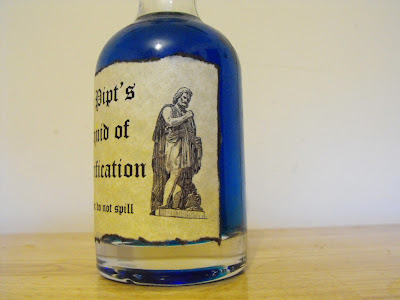 I decided to fill it with blue liquid as the book does not say what colour it is and they are in Munchkin country. This the faze where Baum was writing that *everything* n each country was that colour (Munchkin=blue, Winkie=yellow, Quadling=red, Gillikin=purple, Emerald City=green) . So far in the story there has been a mention of blue peas, sweet milk with a delicate blue tint, a blue pudding with blue plums and a blue log in the fireplace.

So that’s my Oz crafts for a while. Stay tuned for another Oz post soon about the impossible journey of Ojo the Unlucky!
Posted by Heather Tisdale at 06:38