Oh my stars. A person doesn't know they need a holiday until they get one and the  tensions of everyday life just melt away. It has been a roller coaster of a year living in Cymru. Mostly good, but with a few rocky elements to it. There were those very slow first months where I was I was unemployed and life was harsh and cold and I was dreadfully homesick, but it has picked up considerably from there.

Even so, when we realised we had enough money from my hours working  in the shop saved up to take a mini-break to Bristol--we ran with it. Then my lovely Mum wired us a bit of extra cash so we could eat out for a few meals rather than PB&J it in the hotel every meal. Thanks Mum!

Bristol by train is an easy 3 hour journey with a change in Cardiff. We left on Tuesday at 11:00 and by 2:30 we were nestled into our budget hotel. We chose Travelodge as they have really good prices, are a clean well lighted place and they had plenty of vegan breakfast options. We chose them in spite of their slightly creepy adverts where a person has a doppelganger puppet who does everything they do.

We quickly unpacked and went to explore the city. A funny thing struck us--we really missed all the bilingual signs. I genuinely felt Welsh and proud of my country and felt like a part of me was missing without the Cymraeg.

Bristol itself is a bustling, multi-cultural city with graffiti everywhere and students whizzing down the cycle paths on their bikes. It was quite big and we walked about 8-9 miles a day just in and around the city centre.

We scoped out the places we were planning to go as well as the supermarkets and then headed down to the Eat a Pitta. This little food kiosk was recommended by the son of a vegan friend and it did not disappoint. There were gluten free options (don't get the pitta bread or couscous)  as well as vegan ones (only the yogurt dressing was not vegan) so we had an *enormous* box of salad with picked red cabbage, shredded carrots, pico de gallo, banana peppers and gherkins and 6 amazing gluten free falafel with a blop of hummus. Yummus! We ate it al fresco and watched the beautiful city then got ready to go see  Arthur Miller's play The Crucible at the Bristol Old Vic.

We both love this play about the Salem Witch Trials which was a thinly veiled attack on McCarthyism and this production did not disappoint. It starred Dean Lennox Kelly as John Proctor (you might remember his as Shakespeare in an episode of Doctor Who) and Neve McIntosh as Elizabeth Proctor whom you will definitely remember from Doctor Who where she normally looks like this: 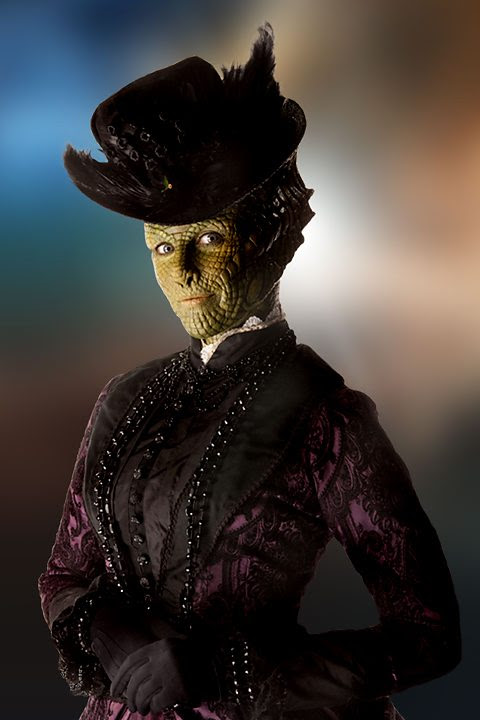 We opted for the cheap but unusual seats on the stage. Seriously, ON THE STAGE! We sat in pew-like rows behind the actors and it was performed like it was theatre in the round. It was such an intimate performance as the actors were there--close enough to touch (I was *desperate* to pull some loose bits of thread off of the back of the Reverend Parris). I honestly don't know what the audience on the other side of the proscenium saw as so much of it was directed our way. We saw faces and expressions UP CLOSE and Reverend Hale interacted with us several times. We got to see costumes and how they were made and distressed (because costume design is an interest of mine this was fascinating to see how clothes had been altered and aged). It was clear to see up close how much finer the Putnam's clothes were to everyone elses--their wealth and their sense of entitlement went hand in hand.

There was a real sense of being a part of the production, particularly during the trial scenes. Spiderman said, "Do we sit in judgement or are we the condemned?"   It was powerful stuff.

The whole sense of the play was powerful with many scenes having all the actors on stage at the same time, sitting on benches around the action in the middle. The cast would quietly sing hymns to frame the action and add atmosphere. In the opening scene where everyone was praying for Betty Parris to wake, every actor was on stage mumbling prayers or singing hymns and rocking back and forth--except John Proctor who had his back to the audience and stared directly at us, without saying a word. i don't know what the audience saw, but but his face was wondrous to behold--a kaleidoscope of emotions.

With very little furniture--a few benches and some tables--the story was told through the powerful writing and first rate acting. At the end (spoiler alert) where John Proctor decides to die with honour--to lose his life and be hanged for a witch rather than save himself by a false confession and damn his soul--I thought my heart might leap out of my chest. The cast was onstage, everyone singing a hymn that rose higher and higher. It grew louder and more intense as he walked toward the gallows--an actual gallows. A noose appeared above a platform and the trees were littered with bodies hung as a warning to others. Slowly he walked towards the gallows--the acapella hymn swelling, a drum beating (which i thought was actually my heart) and Elizabeth Proctor says the line about He has his goodness now but all eyes were on John Proctor as he mounted the scaffold. He put the noose around his neck, the drum was pounding, the hymn was so intense as it was right there all round us and BOOM! He stepped off the platform into darkness.

I was just left stunned, opened mouthed like a fish. It really was made more intense to be part of the show not just an observer in the audience. As we were walking out I was remarking to Spiderman how well directed the show was and how i was so glad we had opted for the stage tickets. An older gentleman turned around and said, "Oh, were you on the stage?" and i proceeded to tell him what a powerful, intimate experience it was. After he walked away Spiderman told me that he was actually the director! ha!

If you want to know more about the production--click here for some videos about the show and interviews with the cast.
http://www.bristololdvic.org.uk/thecrucible.html

We walked back by the moonlit river to our hotel and snuggled up for some telly and some crisps and salsa before falling into a  blissful sleep. Did I mention that Travelodge uses the same brand of really posh mattress that we do with the pocketed coils? oh yes they do and unlike some hotels with a lumpy, springs-poke-you mattress where i sleep all wonky and wake up crooked--I slept like the dead (to quote another Arthur miller play Death of a Salesman).

Stay tuned for day 2 of Blissful Bristol!
Posted by Heather Tisdale at 13:09