Singin' and Playin' and Eatin' and Chattin'

The Carmarthen Vegans have been busy!  We recently had our spring Meet and Greet event which was *hugely* successful. We had about 60 people come --about half of them new faces--and as usual we had a great time visiting with people and stuffing our faces. 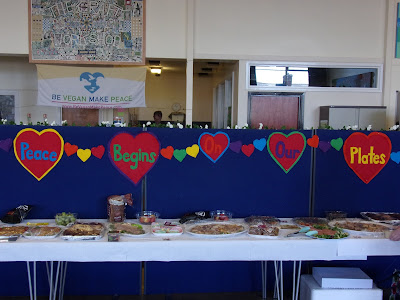 Priya had me make some new decorations for this event. The theme was Be Vegan for World Peace and so the words Peace Begins On Our Plates seemed appropriate.

We still had some decorations from previous events like this one: 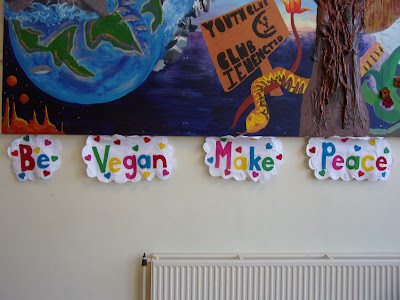 We also had an open mic and provided lots of entertainment ourselves. 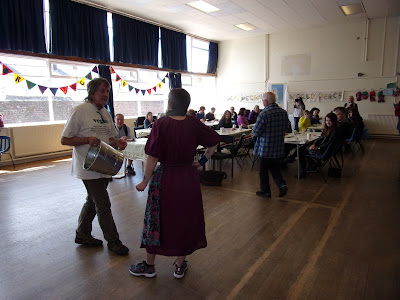 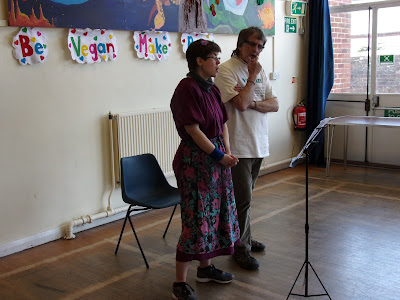 Here we are singing Where have all the flowers gone by Pete Seeger.

My BFF  Rosie-Mai and I played a few songs on our ukuleles and sang together. We did a song I wrote to the tune of Dolly Parton's Jolene all about the three reasons to be vegan--the animals, your health, the environment (lyrics coming soon!) and we also played The Lion Sleeps Tonight. 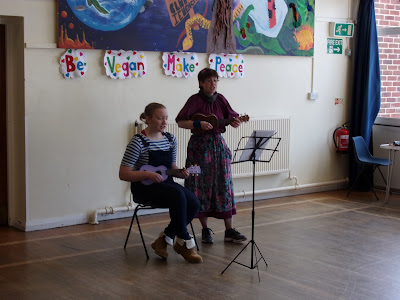 Rosie-Mai is only 19 but we have so much in common--I swear we are really long lost sisters. When we first met at a vegan gathering we had so much in common--we both play the ukulele, both write short stories, both in education (Rosie-Mai is training to be a teacher), both have a background in amateur dramatics and later found out things like we both love Simon and Garfunkel.

Rosie-Mai also did a stunning solo of the incredibly heartbreaking The Green Fields of France  about a 19 year old soldier who died in WWI. Sadly, we didn't get a picture of her playing--probably because we were all crying. 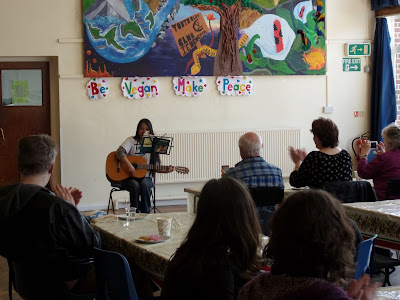 Here is Priya playing the guitar and singing in Mandarin. I have no idea what she said, but it was very beautiful and poetic! 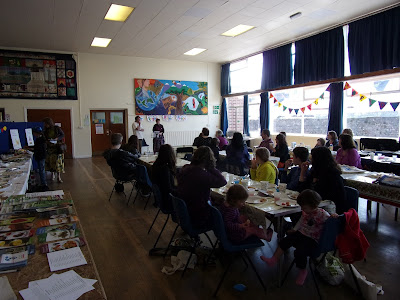 Here are just some of the people who were there--a really good mix of young and old. Oh! Speaking of young--my favourite munchkins H and M (the ones that I tutor) got up under the name Mega Cool Vegans (their choice--not mine!) and H read a beautiful passage from a book about not harming any living creature and then we sang a few vegan children's songs that we have made up to the tune of other songs such as this one to the tune of I'm a Little Teapot:

I'm a little vegan
kind and sweet
I don't drink milk and I don't eat meat.
I care for animals can't you see?
Making life better for you and me!

What fun! The whole event was a blast. It is great to have so many like-minded people of all ages to spend time with. We are so happy we have moved to Wales!

The only hiccup in an otherwise perfect day was our oven decided to be contrary and stopped working just as i was trying to bake loads of brownies and egg free quiche for the event. Everyone looks forward to my brownies and quiche as they are vegan and yum but also gluten free for those of who need that sort of thing too. Oh No! We coped in the end by making several raw desserts that were v/gf using nuts and dates and i bought some smoked tofu and vegan cheese and put cubes of them on cocktail sticks.

For fun (and to help me get over being so cross about the oven) we made up a song to the tune of American Pie.
The day the oven died....
We were singing
Why, why won't my oven even try
to be heating stuff for eating
Now i think I might cry.
This couldn't have happened at a worse time for me
because now I can't bake some brownies.
Now there won't be any quiche.

(The oven is mostly fixed now--so no need to worry) And despite the oven fiasco, i did not let it ruin my day.

It was still a brilliant day, with friends, food and music. What more do you need?
Posted by Heather Tisdale at 03:22