REM
I have been a fan of REM since lead singer Michael Stipe had hair. I was there for songs like The One I Love and Orange Crush (about agent orange, in case you didn't know) but my favourite overall album which I had on cassette and later replaced on CD was 1986's Lifes Rich Pageant. There were lots of environmental songs and it was hard to choose a favourite. The song I Believe has one of my favourite lines of all times-- trust in your calling, make sure your calling's true. think of others, the others think of you.

But ultimately I chose Fall on Me.
Watch it here:
REM did not appear in any of their early videos. The next choice is a stream of consciousness list song (how I love a list!) called It's the End of the World As We Know It (and I feel fine) from 1988. The original video featured a sk8ter boy mucking about in a derelict house. While it is good to watch  those early videos of REM where they never appeared and this one, in particular, is very indicative  of 80's videos that weren't a West End/Broadway musical but just some random film clips with a song. I have chosen one with the lyrics going across the screen as it can be a wee bit hard to understand without them. I tried for many years to learn all the lyrics and only thanks to googling lyrics was i able to do it.
Watch it here:
My last REM choice is one of their later videos where Micheal Stipe has less hair and they actually started appearing in their videos and it is more of a big budget West End/Broadway musical types, but the song is great. Especially the mandolin at the beginning and Micheal Stipe's dancing. It's called Losing my Religion. Can you spot Saint Sebastian?
Watch it here:

FYI: Losing my religion just means to lose your patience/lose your rag/lose your temper/be at the end of your rope.

Roy Orbison
They don't call him "The Big O" for nothing. He does a brilliant version of I Drove All Night which was later covered equally sexily by Cyndi Lauper. I *hate* the video however. It stars Luke Perry and Jennifer Connolly as young lovers and I just can't cope with the Big O's sexy voice and someone from 90210. So I am just using the audio version.
Listen to it here:
And just for contrast as I didn't mention Cyndi Lauper back under letter C even though i should have. I love his voice best and hate his video, and like her voice less but love her video--especially her Cruella DeVille hair and the automobile footage projected on her naked body.
Watch it here:

Robyn Hitchcock and the Egyptians 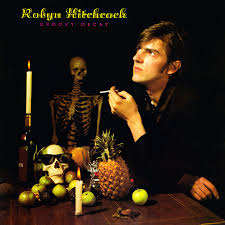 I honestly don't know anything about Robyn Hitchcock, but I fell in love with a quirky song that I saw on MTV's 120 Minutes called Balloon Man. My favourite line is: And it rained, like a slow divorce and i wished I could ride a horse. It is weird and nonsensical but also full of whimsy. I also love it because it is one of those 80's videos that were clearly homemade with the highlight being some stop motion fruit and veg. Do you remember this one Mum on all of our late nights watching 120 Minutes?
Watch it here:

Rush
When we were at LC we had this Pentecostal friend called Lew who always wore a Rush t-shirt. It seemed out of character for her so i asked once is she was a fan of the band to which she replied "Band? I didn't know it was a band. I just liked it because I like to hurry everywhere. You know--rush, rush, rush."  I miss you Lew!

But Spiderman and I are both fans of Rush and Geddy Lee's distinctive voice. Once, in the first year we were married and Spiderman was teaching English at a small Catholic school called St Rita's, the school had a carnival and Sister Noel hired proper rides like the Octopus where your cart spins and it goes up and down and in a circle.
Anyway, when we got on it was playing Tom Sawyer by Rush and I remember feeling so happy. As it turns out, it ONLY played Tom Sawyer by Rush I guess the carnival barker must have loved Rush as well!
Watch it here:
Bit o' trivia:Gabriel Rodriguez the illustrator of the best graphic novel series in the world Locke and Key is a big fan of Rush and often sneaks the band's names in illustrations to annoy the author Joe Hill.

Rachel Bloom
I have a big girly crush on Rachel Bloom. I could make you watch every one of her funny videos on her channel https://www.youtube.com/user/racheldoesstuff I have never seen her musical telly programme Crazy Ex-Girlfriend but I have watched all the videos from it. She is a comic genius--whether she is singing her clever songs herself or letting some other talented person sing them on the show--she is the shiz.
It was hard to narrow down, but I will choose one from her funny songs and one from Crazy Ex-Girlfriend. My first choice has to be I Steal Pets. I love her use of autotune here--just like those terrible songs written by talentless teens who can't sing but somehow become pop sensations. Rebecca Black i am talking to you.
Watch it here:
This one features the brilliant Tovah Feldshuh as her mother on Crazy Ex-Girlfriend and you can see where the character gets her neurosis from. It was written by Rachel who really captures that Jewish mother vibe.
Watch it here:
So that's the Letter R. Stay tuned for Letter S.
Edited to add: Where are the Ramones???? They were on my list and somehow I couldn't read my own writing and they got forgotten! I love this long haired, sneaker wearing punk band. They do a bunch of great songs like I Wanna Be Sedated, Sheena is a Punk Rocker, Blitzkrieg Pop, Teenage Lobotomy and the theme from the film Pet Sematary (to name but a few favourites) but my choice has to be their cover of the Spiderman theme from this CD we have of cool alternative/punk bands singing your favourite Saturday morning cartoon themes.
Watch it here:

Posted by Heather Tisdale at 00:47