Led by ethical vegan Morrissey with his distinctive slightly nasal Mancunian twang (meaning his Manchester accent) what's not to love? Early on in their career they had a song called Meat is Murder that had some very graphic lyrics. The best line is:
And the flesh you so fancifully fry
is not "natural", "normal" or kind.
It's death for no reason
and death for no reason is MURDER.

They had other hits that had some great lines like in the song Ask where it says:
Spending warm summer days indoors
writing frightening verse
to a buck-toothed girl in Luxembourg.

But their best album by far is The Queen is Dead. There is not a bad song on there. Everyone a winner. They span the weird cheeriness that Morrissey can have in  Frankly, Mister Shankly to the downright depressing of I Know It's Over with lines like Oh mother I can feel the soil falling over my head.

So I will pick a cheery one and a sadder one. My cheery pick is called Cemetry Gates. It is full of literary references. Plus it has this great pun of "gravely read the stones"--geddit?
Listen to it here:

My sadder choice is called There is a Light That Never Goes Out. If you've ever been an intense, doomed teenage romance you have probably been here. This song was about me and Tim for sure.
Listen to it here:

I was totally in love with Brian Setzer and his rockabilly sound. I loved their big quiff hairdos and double bass. I am working on being able to play Stray Cat Strut on the ukulele.
Watch it here:

I was introduced to this folk group by a lovely teacher friend named Helen. When we lived in England I was working in a school and one of my jobs was to choose the music for the week to be played going in and out of assembly. One week I chose Hal-en-tow by the Oyster band and Helen asked me if i knew Steeleye Span. I did not so she promptly bought me their greatest hits CD. Thanks Helen! Here is their most famous song All Around My Hat.
Watch it here:
Sinead O'Connor

Oh poor crazy, mixed up Sinead. You are such a good singer--why have you gone off the rails my darling? I have been a fan of hers since The Lion and the Cobra. I love the way her voice can go from sweet and kind to fierce and then back to soft in the course of one line. I debated long and hard about what to choose for her because her range is so great. Ultimately, i had to choose Nothing Compares 2 U just for the power of her emotions and the single tear. You get a taste of that soft/fierce/soft here but not as much as in Troy.
Watch it here:
Trivia: Prince wrote this song
Sinead also had a fantastic folk album of traditional ballads called Sean-Nos Nua which I would urge you to check out. Here is her version of the traditional Irish playground song I'll Tell Me Ma.  It is by far the best version I know. Better by miles than the Lick the Tins version.
Watch it here:
True fact: In 1990 when Spiderman and I were exchange students in London I shaved my head to look like Sinead O'Connor. Spiderman proposed to me when I was bald so I know he loved me. 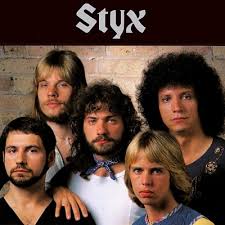 This is a brilliant band. Their singing and musical abilities are so good that they sound fantastic live--almost exactly like they sound in studio which is a real compliment as so many bands live always sound a bit off to me. They've had two (count 'em two!) concept albums Paradise Theatre and Kilroy Was Here, the latter also being a rock opera. You know why I love them. Kilroy Was Here was all about a rock star named Kilroy imprisoned in a dystopian future served by robots by an evil evangelist named Dr Righteous who has banned rock and roll. Lots of this was in response to the false allegations of  Satanic backward masking from some of their previous albums by the Parents Music Resource Ceter (PMRC). They did actually include backward masking on this album saying Latin phrases like annuit coeptis which means God favours our undertakings which is off of the Great Seal of the United States  So suck on that PMRC!

My first choice is taken from Kilroy Was Here. I bloody loved doing a robot dance to this song in 1983. Here is Mr Roboto. The only Japanese I can speak comes from this song.
Watch it here:

My second choice is a more religious/spiritual song called Show Me the Way. It is a great song of longing for faith and doing your best in an imperfect world. Once Scott Sontag (one of LC's best success stories--he is a fab musician living in France as the music minister in a French church) came back for a visit and sang this in chapel and I said to him afterwards I was so pleased he sang this because I love Styx and he became really panicked. He didn't think anyone at our little Baptist college would know it was Styx. He laughed and said he could get in real trouble for singing a "secular" song in chapel but we both agreed this song has more heart and truth than many Christian songs  out there. A similar thing happened once when the AD Players came to LC and they used a great Medieval sounding instrumental song called Overture to the Sun in their show that i recognised from the soundtrack to A Clockwork Orange and they freaked out and swore me to secrecy. Again, they figured no one else would recognise it. Shades of Steve Taylor's I Want To Be A Clone--you will only know what we tell you can know. But I digress. here is Show Me the Way.
Watch it here:

Stay tuned for Letter S--Part 3!
Posted by Heather Tisdale at 00:31