We're on the home stretch guys! Thanks for sticking with me!
XTC

I loved Andy Partridge's distinctive voice, moon face and little round John Lennon glasses. My first choice is from 1982. It is a lovely little selfish song called Senses Working Overtime. Watch after the second chorus where Andy Partridge puts his hand up to his ear to hear the bell dinging.
Watch it here:

How do they make that tambourine sounds so sinister at the beginning of the song?

My second XTC choice is Mayor of Simpleton from their 1989 album Oranges and Lemons. It is so quintessentially  English from the album title based on a children's nursery rhyme Oranges and Lemons say the bells of St Clement's  to their Avenger's style video. You can read about the nursery rhyme here: https://en.wikipedia.org/wiki/Oranges_and_Lemons
Bit o' trivia--a St Clement's is a delicious drink of orange juice and fizzy lemonade.
Watch it here:

Yaz(oo)
This amazing synthpop duo is made up of former member of Depeche Mode Vince Clarke on keyboards and the amazing deep expressive voice of the beautiful Alison Moyet and is one of my favourite bands of all times. Their experiments with sound and spoken word (the haunting I Before E Except After C) made them legendary to me. This is one of those albums that Spiderman and I both had. I think this guy named John David A introduced them to him. John David A is the linchpin of our Six Degrees of Separation. I knew JD from school, Spiderman knew JD from summer camp where they were both counsellors . we were ONE step away from each other and didn't even know it. But I digress.

The band was called Yazoo in the UK and just Yaz in the US. Hence the need for brackets. Yaz(oo).

Upstairs at Eric's in possibly one of the best albums of all times. It was hard to choose just one song. Or maybe two. My first pick is Don't Go so you can take advantage of some of that funky synthesizer and expressive voice of Alf (as Moyet was affectionately known) Plus I dig the coloured strip lighting and all the heavy eye make up of Alf and the "Flock of Seagulls" hairdo of Clarke.
Watch it here:
My next pick is a called Bad Connection. It has a synth riff that is hypnotic and tells a strange story of the phone line being down.
Listen to it here:

My last Yazoo pick is from their second and last album You and Me Both. It is the saddest breakup song I know. it's called Nobody's Diary and really utilises the beautiful, expressive voice of Alison Moyet, but what the hell is up with Vince Clarke's hair? he went from Flock of Seagulls to atomic mushroom cloud.
Watch it here:
Interesting Fact: Yazoo broke up and Vince Clarke went on form Erasure with Andy Bell who sounded almost *exactly* like Alison Moyet. FACT.

Ylvis
This band is made up of Norwegian brothers Vegard and Bård Ylvisåker. I really only like one song by them. it is a weird sort of earworm that I learned one day a few years back when every third act at our school talent show was this song. There is something mesmerising about it, especially the nonsense sounds. This is called The Fox.
Watch it here:

and last but not least ZZ Top. 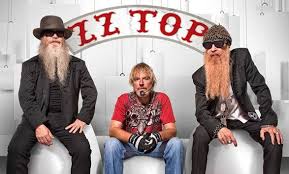 It's all about the beards, baby. I don't listen too much to ZZ Top these days, but in the 80's their videos were a staple in my diet. They all had several things in common--this video alone features big beards,  fuzzy guitars, the red car, the underdog, a makeover, girls in short dresses with baby girl socks and high heels and the key chain.  It is called Legs.
Watch it here:

I once bought the key chain for my friend Laura M. Also when we had been drinking we used to do that wave at the end of the video.  Actually we did it when we were sober as well cause we were those young teenage girls who can't stop giggling at their own inane jokes. You know the type.

So that's my list. Every letter had several more I could have chosen, but I tried to scale it down to a manageable size.  It has been fun to remember why I loved these songs so much and how certain songs represent a period of my life so clearly. I hope you have enjoyed this series. Make up your own list. I'd love to hear what songs were there for you.

Posted by Heather Tisdale at 00:03