Hello my lovelies! It has been simply ages since i wrote for the blog. This was due to the fact that we have had company for the last 2 weeks.

There's nothing like company coming  to make you spring clean your house.

I guess I missed doing it in spring. But company is always the incentive to put away all the stacks of papers and books and dust in places I don't dust very often.

As evidenced by the helpful little clean spots i found when I picked up knickknacks to dust them that shows they have sat there so long dust has formed AROUND them.

Yeah, we have *way* too many knickknacks.

MY FOLKS ARRIVED!!!
My mum Becky and my soon-to-be step-dad Carl came over from Louisiana for a visit. They flew into Bristol (remember our lovely trip to Blissful Bristol?) and had a few days there and then took the train to Carmarthen.

They took the wrong train, not the one they told me they were taking, and so we had a bit of Comedy of Errors looking for each other for several hours.

I can laugh about it now.

But we had a most excellent week. The perfect balance of staying in and hanging out to going out and doing stuff.

I am afraid i have no pictures to show you at this point because *someone* not saying who (coughcoughMum) forgot to load all the photos from her Smartphone onto my laptop before they departed.

Yeah, both my folks have a Smartphone. In their 70's. We've only just gotten around to getting our first mobile phone two years ago and it definitely NOT a Smartphone.

It's sad when your parents are cooler and more hip than you are.

But, in my defence, Smartphones need a whole lotta charging. My little crap Nokia lasts for a week before it needs a charge so i guess there are some advantages to having a Dumbphone.

Stuff we did:
We went to the monthly vegan lunch at the Waverley cafe.

We had a nice meal --a sort of continuous feast--with our friend Priya out at the home of our friends Kathryn and Peter. We ate and laughed and talked about our favourite John Wayne films and got home that evening and were too full for dinner.

We did manage a wafer thin mint (for all my Python fans out there) in the form of homemade chocolate pudding.

We also spent a day at the Botanic Garden of Wales.

Have I ever mentioned that an episode of Doctor Who was filmed there????

We pottered around the shops and the indoor market near the historic clocktower. 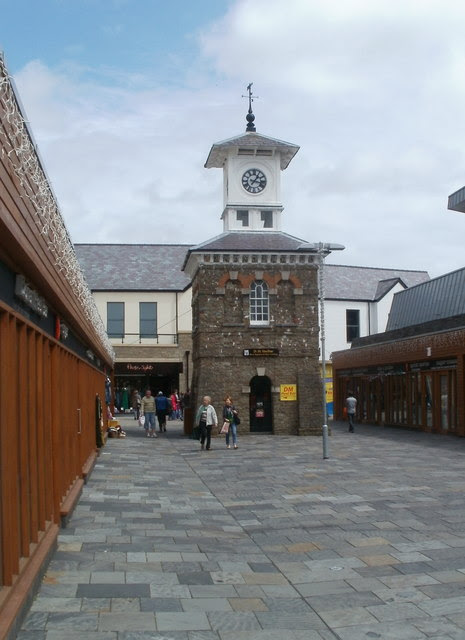 We went to a concert at the Lyric Theatre  to hear a Celtic Bluegrass band called We Banjo 3.

Despite the fact that they actually only have 2 banjos and 4 band members (where does that 3 come from???) a good time was had by all. The music was toe-tapping, hand-clapping good and that fiddle player plays so fast that it looks like his hands might burst into flames. Here they are singing a song where he exchanges the fiddle for the bodhran drum and also sets it on fire.

In case you didn't know my Mum and Carl are soon to be married so we spent some time altering her wedding clothes (at the last minute) and finding a pair of earrings that my grandmother gave to me that I wore at our wedding to give to her so she could wear them at her wedding. Like passing it down through generations (only slightly out of order).

We had a lovely time and they thoughtfully brought us several boxes of that American manna from Heaven (or perhaps manna from the South)  Instant Grits which you cannot get here.

British folks, you don't know what you are missing. It's basically hominy (field corn not grown for human consumption)  soaked in lye and wood ash. Actually, that sounds really disgusting.  Don't think about it too hard. Just eat it.

Lastly, they kindly brought me something I have longed for from my Mum's collection of knicknacks. It is something that I associate with her because it represents history and when she was my teacher for American History she did a cracking unit on President Andrew Jackson. I think she bought this in The Hermitage which was his home. It is a cast iron frog that weighs 5lbs (so bless Carl for carrying it all the way as he is the designated heavy bag carrier) and it says I croak for the Jackson wagon.

For a long time it was believed to be something used as advertising for Jackson's 19th century presidential campaign, but the Smithsonian now believes it was part of an advertising campaign in the 1880's for a wagon company in Jackson, Michigan.

Well no matter. To me it will always represent my Mum and the way she brought history alive as a teacher.

Thank you for a lovely visit. May you and Carl have a long and happy life together.

Thank you Brexit (I never thought I would say that) so that the pound fell in value again while they were here so she was able to leave us a bit of pocket money to put towards our 25th wedding anniversary in 2017 where we have big, exciting plans.

Posted by Heather Tisdale at 05:48