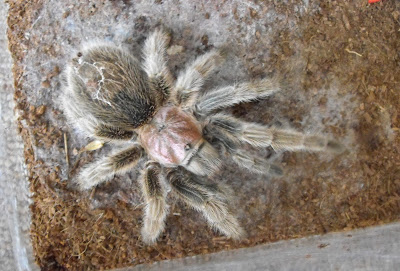 Other spiders do a lot of preparation before hand to let you know a moult is coming.

Other spiders stop eating and seem almost fearful of food so that you have to awkwardly fish a live cricket out of their tank because it is scaring your sweetums.

Other spiders do "spider yoga" for several days where they stretch up against the glass to loosen their carapace.

Other spiders lay a web mat down so they have a soft place to moult. When you see that happening you know they will "do their thang" in a couple of hours.

Other spiders moult on a regular schedule at three months, then six months, then once a year when they reach adulthood.

To be fair, some of that one is her species. She is a Chilean Rose and they don't always follow the once a year schedule.

It's been over three years since her last moult.

And we have no idea how old she is as she is a rescue and she hasn't followed the moulting schedule which helps you to determine the age of a spider.

We just woke up today and she had done it. Just like that. Boom.

Rossetti is our special needs spider.

She seems a bit dyspraxic (like dyslexic only with coordination and movement). As she is stalking her prey (and if you have ever seen a spider hunt, they really stalk like lions) she creeps toward the cricket and then.......pounces in the wrong direction!

I mean *really* hates. I didn't even know spiders could have emotions like this. But hers are strong ones.

We put a small plastic tree in her tank. She worked for days to wrap it up in spider silk which pulled all the sticky-out branches flat. then she bulldozed the tree, carried to her hidey (which was like a hollowed out log) and spent two days shoving the tree under the log and then buried the ends of the tree in substrate so she didn't have to look at them. Not like she could really look at them because despite having eight eyes, tarantulas are virtually blind and rely on other senses like touch to get around.

But you know what I mean.

And for the last two years she has had a bit of web hanging off her butt like toilet paper on the bottom of your shoe.

But we love our little bundle of contradictions.